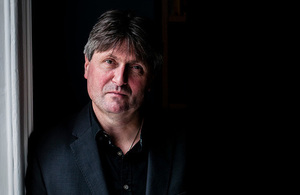 Marsden’s Simon Armitage will be the next Poet Laureate.

Taking over from Manchester Met’s Carol Ann Duffy who served in the role between 2009 and 2019, Armitage becomes the 21st holder of the title.

A Professor of Poetry at the University of Leeds, Simon has published 28 collections of poetry. His work has been studied by millions of children as part of the national curriculum and in 2010 he received a CBE for services to poetry.

Simon was born in Marsden, West Yorkshire, in 1963 and worked as a Probation Officer in Greater Manchester until 1994 before focusing on poetry. He was elected to serve as Professor of Poetry at the University of Oxford from 2015 until 2019 and is also the Holmes Visiting Professor at Princeton University, New Jersey, United States of America.

In 2012, as part of the celebrations of the London 2012 Olympic and Paralympic Games, Simon conceived and curated the Poetry Parnassus, a gathering of world poets and poetry from every Olympic and Paralympic nation, which was the largest gathering of international poets in history. Simon also received The Queen’s Gold Medal for Poetry for the year 2018, awarded for excellence in poetry, on the basis of his body of work.

“It’s a huge honour to be appointed Poet Laureate, one of the great high offices of literature. Over the past two decades the laureateship has become a working role, with previous laureates actively involved in the promotion of poetry and in numerous initiatives to identify and encourage talent, especially within education and among younger writers; I hope to build on the work of my predecessors with energy and enthusiasm.

Since the laureateship was first conceived many hundreds of years ago Britain has changed enormously and the position of Poet Laureate has changed accordingly – I want to celebrate and speak on behalf of the variety of voices who contribute to the rich chorus of British poetry from a wide range of personal, literary and cultural experiences, and to help poetry explore its potential in a multi-faceted, multi-vocal and multi-media age.

The poetry of these islands is one of our greatest achievements, and as well as being proud of its traditions I want poetry to feel confident and at home in the contemporary world and to demonstrate that in a hectic and sometimes frenetic age the combination of considered thought and crafted language is more relevant and vital than ever. I hope poets, readers and audiences will support me in my efforts.”