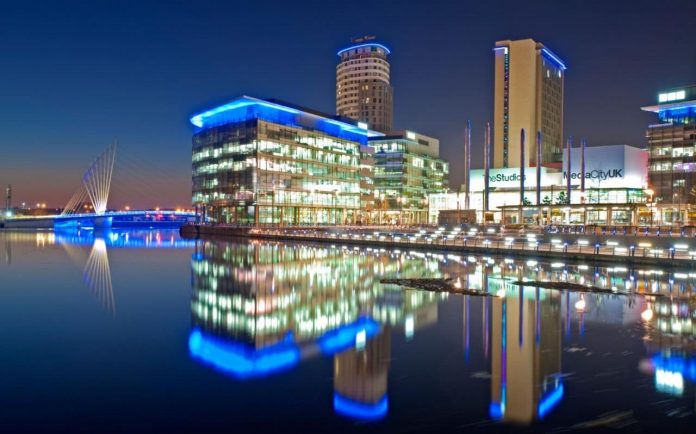 It is 10 years this month since construction began at MediaCityUK – in that time, the former wasteland that once housed Manchester’s docks has been transformed.

Today, MediaCityUK is firmly established as the home to the BBC, ITV, dock10, the University of Salford and more than 250 creative, digital and technology businesses.

The dramatic journey to become a thriving waterfront destination is showcased in a video produced by dock10, featuring compelling images showing how the site originally looked when it was a working dock back in the 1960s, employing up to 5,000 people.

A piece of derelict land which once acted as a car park for the Lowry arts centre, is now a community of 7,000 people, living, working and studying at MediaCityUK.

John Whittaker, Chairman of The Peel Group, said: “Our initial success in securing the BBC as an anchor occupier at MediaCityUK was the result of a strong partnership with Salford City Council and the Central Salford Urban Regeneration Company. Our belief in a shared vision and Peel’s commitment to invest more than £650 million in phase one ensured the delivery of a truly transformational media community, with huge potential for future growth. Indeed, it’s hard to believe that it’s already 10 years since we started construction!”

MediaCityUK is a joint venture between Peel and Legal and General Capital and ambitious plans to double the size of the development by 2030 were approved last September, with a further £1 billion of private investment to come.

Stephen Wild, managing director at MediaCityUK, said: “Looking around the MediaCityUK we see today, it’s scarcely imaginable that just 10 years ago, nothing was here. As well as becoming a major, international media hub with leading broadcasters and television facilities, we’ve created a unique community of creatives who are writing a new part of history for Manchester and Salford Quays.

“While we’re incredibly proud of what’s been achieved so far, it doesn’t stop here. Our new apartment scheme, Lightbox, is being built as we speak, and work is underway for two fantastic new bar-restaurants – The Alchemist and The Botanist – set to open at the end of summer. It’s a very exciting time for MediaCityUK, and at this crucial juncture, it’s important to take stock of where we’ve come from, before embarking on the next leg of the journey.”

Paul Dennett, Salford’s City Mayor, added: “The regeneration of Salford Quays has been more than 30 years in the making with iconic projects such as the Lowry Arts Centre and MediaCityUK at the centrepiece of the ambitions of the City Council and our many partners. We are delighted with the hugely significant contribution that MediaCityUK is making to the economy of Salford, Greater Manchester and the Northern Powerhouse, particularly in the areas of innovation and the nurturing of digital skills. Salford is now one of the top five places in the country for start-up growth and we look forward with great excitement to the next decade and beyond!”

House Prices continue to be sluggish