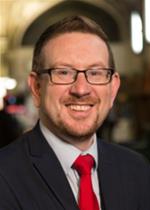 Local MP and Shadow Cabinet member Andrew Gwynne has refuted a story in this morning’s Sunday Telegraph that links him to membership of a Labour supporters’ Facebook pages in which anti-Semitic posts are being shared.

As the controversy over the Labour Party’s response to anti Semitism has rumbled on, Gwynne, the Shadow communities secretary, said he was added to the group on the social network without his knowledge or permission.

In a statement made on twitter, he said that anti-Semitism has “absolutely no place” in the Labour Party or wider society

“I DO NOT support the posts and I ABHOR anti-Semitism. It has absolutely NO place in the Labour Party or in society. End of.#EnoughIsEnough”

Posts on the site last week include one on Friday which said “Jews will pay 7 times more for their sins – Islam will unite the religious world”.

Another post, from April 4, showed a gunman squatting in a star of David symbol, with the words “Palestinian Holocaust” written in the colours of the Palestine flag, the newspaper reported.

Meanwhile another local MP, Angela Rayner, has condemned local Labour members who forced their MP to flee a meeting over her support for a demonstration against anti-Semitism.

Thangam Debbonaire was heckled by activists at a packed meeting in Bristol West at which a motion criticising the demo organised by major Jewish groups was narrowly defeated.

The Shadow Education Secretary said her colleague was an “an absolute credit” to the party and urged activists to channel their anger onto the Government’s policies instead.

More green buses for the region