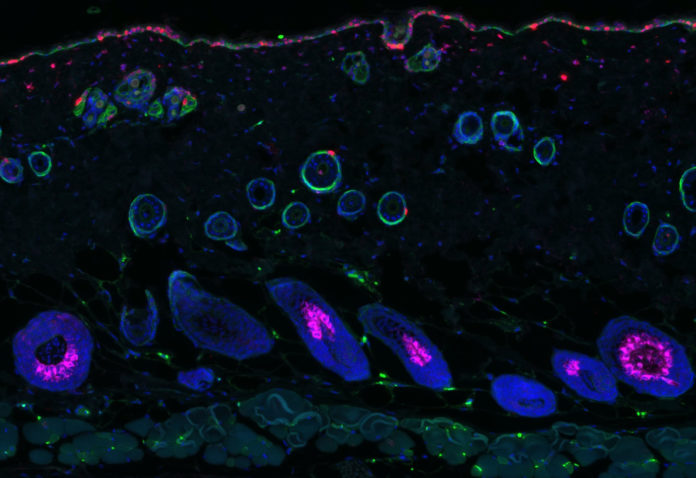 GREATER MANCHESTER scientists are set to benefit from one of the biggest funding grants ever awarded by Cancer Research UK.

Researchers at the Cancer Research UK Manchester Institute, part of The University of Manchester, are set to receive over £2 million as part of a £19 million investment by the charity in a five-year global research project to investigate why some cancers are specific to certain tissues and not others.

The funding for the ground-breaking research will come from Cancer Research UK’s Grand Challenge awards – set up to revolutionise the prevention, diagnosis and treatment of cancer.

The Manchester scientists are part of a team of experts from Glasgow, the US and the Netherlands who beat stiff international competition to secure the funding.

They will bring their world-leading expertise in skin cancer to the pioneering project which was selected by an international panel of experts from a shortlist of ten exceptional, multi-disciplinary collaborations from universities, institutes and industry across the globe.

Professor Richard Marais, Director of the Cancer Research UK Manchester Institute, currently based at Alderley Park in Cheshire, said: “We are delighted to be part of Cancer Research UK’s Grand Challenge. This award endorses Manchester’s position in the global fight against cancer. It will allow us to answer fundamental questions about cancer biology, how it is caused in different tissues and why particular cancers kill some people but not others. This is not something we could do by ourselves, so being part of this international team is important to our success.”

Cancer Research UK’s Grand Challenge was established to help scientists attack some of the hardest, unanswered questions in cancer research.

The international project team is looking to understand why genetic faults only affect certain tissues.

If someone carries a potentially cancer-causing gene mutation, this fault can exist in every cell of the body, but only causes specific cancers, such as breast or skin. The team is studying why this is the case and will use this information to find ways to prevent or treat cancer in these organs.

Professor Marais continued: “My team will be looking at DNA damage in skin cancer. We want to understand why a particular type of DNA damage causes the most-deadly type of skin cancer, melanoma, but not squamous cell carcinoma, a more common form of skin cancer.

“Sharing the knowledge gained by different researchers in the consortium will give us an insight as to why particular-types of DNA damage drive different cancers in different parts of the body.”

The research has been welcomed by North West head and neck cancer survivor Chris Curtis, from Blackpool, who played an important role in developing the team’s research proposal.

Father-of-two Mr Curtis, 60, was diagnosed with head and neck cancer in 2001 and went on to undergo radiotherapy, chemotherapy and have two major operations.  He was part of the Grand Challenge Patient Advocate Panel.

Mr Curtis said: “It’s great to see such a large investment in this area of research and to have scientists from the North West playing a part in this international project.

“I was particularly impressed with the scientists’ passion. For me, knowing this is going to help tomorrow’s patients is very important. This research could make a real difference in the future.”

The project is also supported through a partnership with The Mark Foundation for Cancer Research,* based in New York.

Alison Barbuti, Cancer Research UK’s spokesperson for Greater Manchester, said: “Grand Challenge gives us the perfect opportunity to address complex questions and cross new frontiers in our understanding of cancer, to transform the lives of patients.

“People in Greater Manchester and the North West have every right to feel proud of the world-class research taking place on their doorstep and of their fundraising efforts, which are helping to beat cancer.”

There are lots of different ways people across the North West can continue to support pioneering research into cancer, including: