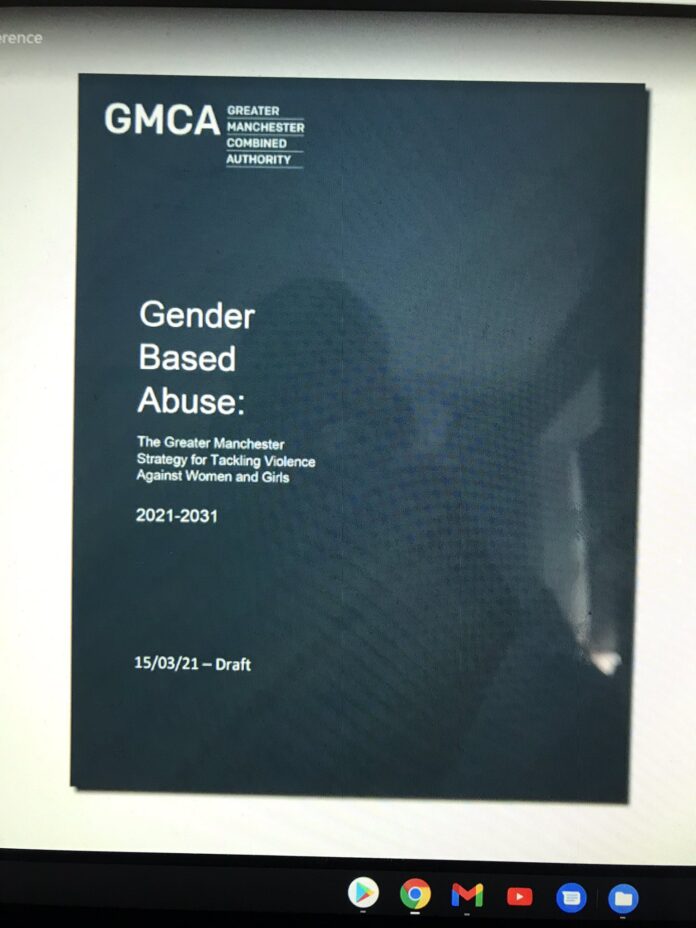 In light of the tragic death of Sarah Everard and the urgency to address gender based abuse, the public are being asked to provide their feedback on the Greater Manchester proposals to make sure it has sufficiently captured the right issues and how to address them before going to a full public consultation in May 2021.

Greater Manchester Combined Authority (GMCA) has been developing an ambitious and transformative 10-year Strategy to provide a comprehensive and responsive service to improve the safety of the mainly women and girls who are victims of gender based abuse. It also aims to challenge the attitudes and inequalities that promote it, and enable those perpetrators who want to change to do so.

Gender based abuse covers a range of harms against women and girls. This can include domestic homicides, domestic abuse and coercive control; rapes and sexual assaults; street and workplace harassment; stalking on and offline; sexual exploitation; and threatening behaviour directed towards women. Most of this abuse is perpetuated by men and boys both in the home and in public.

The figures are stark.One in four women in the UK will experience some form of sexual assault or domestic abuse in their lifetime.

Students are disproportionately affected: in 2019, 12.2% of female students experienced domestic abuse within the past 12 months compared to 7.5% in the general population.
40% of women in the UK are estimated to experience harassment in the workplace.

In Greater Manchester, 36% of all violent crime reported to the police entails domestic abuse.While 80% of the domestic abuse cases that are prosecuted in Greater Manchester results in a conviction – higher than the national average – it represents only about 1 in 13 incidents reported to the police that are successfully prosecuted in England and Wales.

The proposals in the Gender Based Abuse Strategy take a whole-system approach to tackling it. This includes how men and boys think about and treat women and girls and how services can improve, to the criminal justice system, health services, educational establishments, and housing providers – including services for people who are homeless as a result of domestic violence – embedding a gender and trauma informed approach.

On a practical level, the proposals includes funding for specific services and projects, training and development for frontline staff and targeted public engagement campaigns – some of which seek to raise awareness and others to encourage active public dialogue about tackling gender-based abuse and how the public should respond if they see it happening.

Some examples include the introduction of an emergency contact system for passengers using public transport to alert the police discreetly if they are concerned for their safety or that of others or TravelSafe officers or transport staff.

The support Local Authorities across Greater Manchester in seeking Public Space Protection Orders that protect women and girls from harassment and abuse. This will include working with the Greater Manchester Night Time Economy Adviser to implement an action plan that tackles gender based abuse in public places and commercial settings.

Supporting  the ‘Reclaim the Night’ campaign, which raises awareness of violence against women and girls through an annual night-time march across Greater Manchester and builds community support for our weeks of action against gender based abuse.

Reducing the risk of homelessness that forces many victims and their children to endure domestic abuse, and increase the options for rehousing perpetrators to minimise the harm caused to victims and a public campaign on what is sometimes called ‘low level’ harm e.g. wolf-whistling, catcalling, stalking and harassing women in public spaces and verbal abuse on the basis of appearance, dress and sexuality.

The Strategy proposes the establishment of a new Gender Based Abuse Board this year to develop and oversee the implementation of the Strategy over the next 10 years. The Board will include victims and survivors as co-chairs and will continue to work in tandem with the Greater Manchester Women and Girls Equality Panel and its Violence Against Women and Girls Working Group, and it will also work with the Race Equality Panel. It will produce a delivery plan of detailed measures and update the plan every year.

The first priority for the Gender Abuse Board will be to review how domestic abuse cases are managed by Greater Manchester Police (GMP) in light of the HMICFRS inspection report on the service provided to victims of crime by the force.

The review will ensure that the ‘Think Victim’ campaign is fully embedded within GMP and further explore how to improve outcomes for victims in the criminal justice system, ensuring they are offered the very best service, kept informed, treated with dignity, listened to, and understood.

A second priority will to be integrate responses across criminal justice, health, social care, and specialist service providers. This will include radically improving victims’ experiences of criminal justice. Victims will be part of designing, commissioning and reviewing services that tackle gender-based abuse. Moreover, a new Trusted Referrer Scheme will be set up for voluntary organisations, faith groups and schools to refer victims directly to health and criminal justice systems so victims don’t have to constantly repeat their stories.

During this year, and prior to any decision by parliament to include gender as a protected characteristic in hate crime laws, we will carry out a public consultation on how to effectively introduce the recording of misogynistic incidents by GMP, in the same way as they record racist and homophobic incidents. This will ensure that abuse that is aggravated by misogyny is fully investigated and victims of it are offered the same protections as those afforded to all hate crime victims. This should improve confidence in reporting while improving understanding of the impact of misogynistic hate crime and how our wider strategy needs to take account of it.

We will also work with the police to ensure they have the necessary systems in place and officers trained to ensure swift and effective implementation of any changes. Although it should be noted that changing police recording practices would not change what offenders can be charged with in Greater Manchester if, and until, there is a change in the law.

The Gender Based Abuse Strategy also prioritises early intervention to protect children. Over the next five years Greater Manchester will continue to support Operation Encompass, which requires police officers who have attended a domestic abuse incident where a child is present to inform the child’s school by 9am on the next teaching day. This enables schools to provide rapid support to vulnerable children. The Strategy will extend the implementation of Operation Encompass to Early Years Settings and to 16-18 year olds.

A bespoke plan will be drawn up by end of 2021 to address how to effectively meet the needs of male victims and survivors. This will cover the full range of acts of violence, abuse and exploitation in which men or boys are the victims, and in which their gender, sexuality and/or intimate relationships are motivating or prevailing factors.

Mayor Andy Burnham said: “We’ve been doing some serious long-term thinking about gender based abuse in Greater Manchester for a while and we have deliberately brought forward our proposals for a new 10-year Strategy because of the huge public engagement with the issue prompted by recent events.

“It’s taken the tragic death of a young woman to begin a national conversation about how we can collectively tackle the abuse of women and girls – abuse that has gone on for far too long, attitudes and behaviours that go unchallenged.

“I’m asking the public here in Greater Manchester to join our conversation and help shape our ambitious Strategy so we can do this together.

“I want the streets, workplaces, schools, universities and homes of this city-region to be safe for every women and girl. This change won’t happen overnight but there are two main things we need to do. Firstly, we need to work together with a range of agencies to improve the services we provide to victims, and secondly we need to challenge attitudes and behaviours. It’s why I intend to bring forward a high-profile campaign asking men and boys to think about their behaviour and how it makes women and girls feel so we become a better and safer place to live and work.”

Deputy Mayor for Policing and Crime, Baroness Bev Hughes, said: “Tackling gender based abuse is an area I’ve worked on for many years. I hear the harrowing stories every day and the toll it takes on women physically and mentally. It’s pervasive in our everyday life, from walking down a street and being called names because of how you are dressed, or being followed, or being threatened or being attacked. Enough is enough.

“I’m proud of the Gender Based Abuse Strategy proposals we’ve published today and I want to thank the many people who have helped us already to get to this point. However, there may be other issues we should include so I’d want everyone in Greater Manchester to help us get it right.”

Radcliffe woman is making an emotional plea after a locket containing her dead son’s...