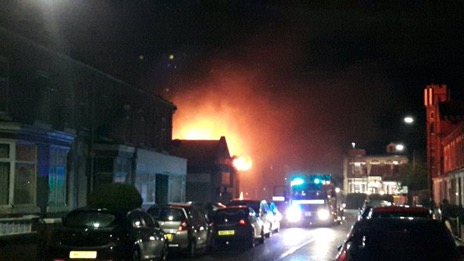 FIREFIGHTERS have brought a large fire at a commercial property in Old Trafford under control.

Six crews and two aerial appliances remain at the scene tackling the blaze and road closures remain in place.

Two gas cylinders have been found inside the property and firefighters are also working to keep these cool.

The incident on Darnley Street is causing some traffic disruption so people are asked to continue avoiding the area, residents should also keep their windows and doors shut.

Firefighters are expected to remain in the area for some time to tackle the fire and make the area safe.

Around 45 people had to be evacuated from nearby properties as a precaution and Trafford Council are working with them.

The fire is not believed to be suspicious but an investigation will take place in due course.

Group Manager Paul Duggan said: “Crews have done a fantastic job tackling this difficult fire and while it is now under control we will be on the scene for some time dealing with this incident.

“I know this has caused disruption to people living nearby and road users and I would like to apologise for this but assure people we are working hard to get roads opened and people back into their homes as soon as we can.”