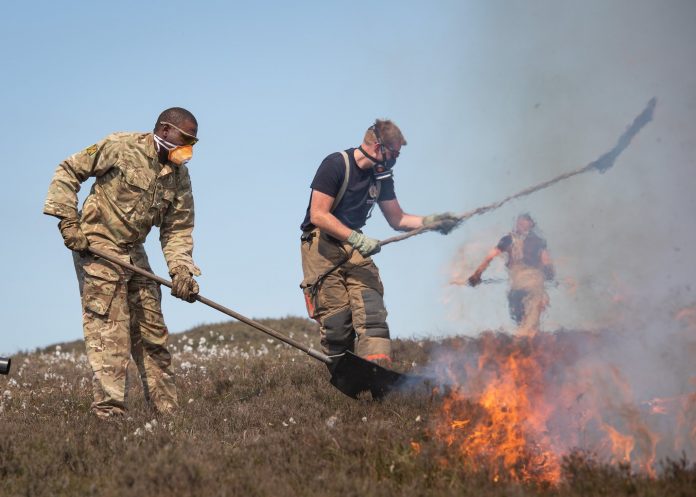 It has been a busy day for the region’s fire service as they had to deal with two other major incidents as well as the fifth day of fires on Saddleworth Moor.

More than 100 firefighters have spent the day continuing to battle moorland blazes on the hills in Tameside, alongside troops from the Royal Regiment of Scotland who were sent to Greater Manchester over night to provide back up. A total of 24 fire engines have been on the scene along with specialist units and officers.

One hundred military personnel have deployed onto the moors and they have been assisting crews in tackling the fire. They have made good progress and the fire remains contained and controlled at this time. There are now five separate areas of fire, reduced from seven.

In addition the service has been dealing with a serious fire in Rochdale and a fire on Winter Hill, along with a number of other incidents.

Fire crews were called to a fire involving wooden pallets at a commercial premises on Moss Bridge Road, Rochdale just before midday.

A total of eight fire engines were sent to tackle the fire after it spread to an adjoining building. Firefighters used an aerial appliance along with four jets to extinguish the fire and crews were on the scene all day and into the evening.

At 3.12pm fire engines were called to a fire involving a TV mast on Winter Hill. Seven engines from Greater Manchester were sent to support a further five appliances from Lancashire Fire and Rescue Service.

Earlier in the day, five fire engines and an aerial platform were called to a fire involving a balcony on the seventh floor of a block of flats on Red Bank, Manchester. Crews used eight breathing apparatus and various equipment to deal with the fire. No one was injured.

Head of Prevention for GMFRS, Area Manager Paul Etches, said: “The moorland incidents in Tameside are unprecedented and they have required a significant amount of our resources over the past few days. We hugely appreciate the support from other services and agencies but this incident has put us under a great deal of pressure.

“Today we’ve also had a number of other significant incidents and I’d like to appeal to the public to take extra care to keep themselves, their families and their property safe – particularly with the hot weather that is expected to continue over the next few days.

“We want people to enjoy the sunshine and we know there will be lots of people having barbecues and enjoying a drink while they watch the football, but this can be a recipe for disaster. Please stay safe by ensuring barbecues are used safely and are fully extinguished before you go to bed, and please take care when cooking – don’t leave pans unattended and don’t drink and cook.

“Take care around the water – in this weather it might seem like a good idea to cool off in a local reservoir or lake but the water can be a lot cooler than you think and can send your body into shock. Even the strongest of swimmers can get into difficulties and there can be unknown hazards lurking underwater.

“And please only call us in an emergency as our control room operators are extremely busy.”