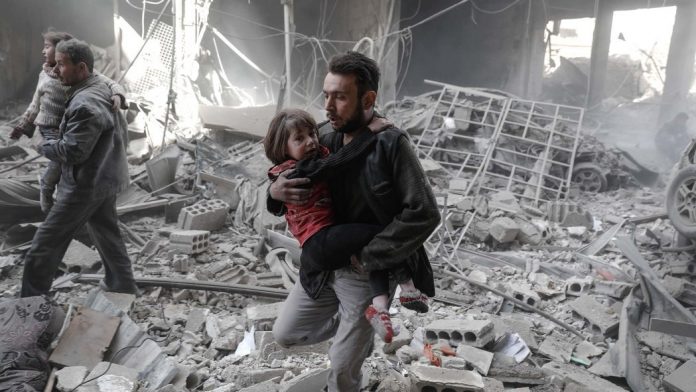 Human Appeal, a humanitarian aid NGO from Greater Manchester, have released a statement saying all military actors involved in the current heightening of violence in the Syria should take civilian lives into account during their operations and have warned against a “victory at all costs” approach which will mean a high casualty rate for the civilian population.

Their Chief Executive, Othman Moqbel, has said “In light of the recent confirmation by the United Nations that September was the deadliest month in Syria in 2017 so far, we at Human Appeal are asking all military actors to take into account civilian lives. The fear from the NGO community is that sides in this conflict will pursue a ‘victory at all costs’ approach and that could mean countless more civilian deaths and we have seen far too many people die in this 6 -year conflict already. We are pleading with all involved to strive as much as is feasibly possible to ensure the lives of people caught up in the conflict are protected.”

Human Appeal were one of the first charities in Syria when the civil war started in 2011. Mr Moqbel continues “We at Human Appeal pledge to continue and increase our work inside Syria. As well as asking for greater care to be taken with civilian lives, we ask that those displaced internally and those who are made refugees by trying to escape the escalating violence, are protected from the conflict and all is done to ensure they get to safety safely. Human Appeal are currently raising funds to help those who have been uprooted by the current heightened violence and we ask the international community to join us and increase the fundraising efforts to aid them also.”

Between 19th and 30th September 2017, airstrikes on residential areas in Idlib have killed at least 149 people. Mr Moqbel describes the situation “The sad fact is that, of those killed since fighting intensified, the majority have been civilians, mostly women and children. Since last month we have seen airstrikes committed against medical facilities. Schools and hospitals in Idlib have been forced to close due to fear of being targeted. This is unacceptable. There needs to be a real effort to make sure civilians are not killed.

“We at Human Appeal have a long history of running hospitals and schools in Syria and we conduct a lot of work in Idlib. This year alone we have distributed essential humanitarian aid to 7,550 newly arrived internally displaced people in the area.

“The conflict in Syria is into its sixth year and is one of the biggest humanitarian and refugee crises of our time with the threat of death continually looming over the people of Syria. Human Appeal has 250 staff inside Syria who continue to risk their lives in order to help those who are the most vulnerable and in most desperate need. We at Human Appeal will not give up on the people affected by this conflict, living with limited access to food, water and basic services.”

Mr Moqbel went further to describe the charity’s work thus far on the ground to help Syrians affected by the conflict. “In 2011, following the outbreak of violence in Syria, Human Appeal were one of the first charities on the ground and we opened our offices in 2013 in Gaziantep from which we coordinate our activities inside Syria. Human Appeal will continue to fund hospitals, schools, mobile clinics, provide hot meals, flour and food distributions. Our medical programmes this year have reached over 169,000 people, 117,552 people have received hot meals and 257,186 people have received food parcels from Human Appeal.

Human Appeal are asking the public to donate at donate.humanappeal.org.uk

A cure for hair loss discovered in Manchester?