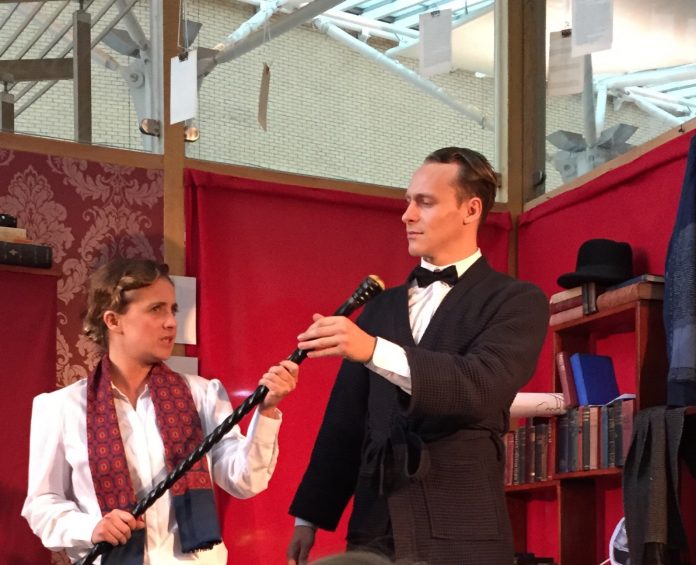 Launching their intimate 30 seat performance space; The Reading Room, Northern Rep’s unpredictable new performance of Arthur Conan Doyle’s classic mystery, The Hound of the Baskervilles is incarnated as never before.

Forget the boundaries of stage and audience and spend an evening relaxing and laughing out loud at the two brave actors, who, with the help of ingenious disguises; well a hat, a scarf and some fake moustaches that is, play every character in a riotous rendition of the riddle.

The performance we witnessed starred the fabulous Angela Hazeldine (Dr Jane Watson) who had the most hilariously exaggerated facial expressions and immense physicality and stole the show in the initial part of the first Act until Christopher Brown (Sherlock Holmes) came into his own as he stepped into alternative persona and the double act with no straight man but plenty of double entendre began in earnest.

What makes this production so special is the fact that every performance will be different as the actors respond to not only the audience but to any external noises you can hear within the Great Northern Warehouse and in this intimate space it feels like you have been personally invited to join some wacky friends at their home as they endeavour to entertain you in an almost panto-like way.

Grab your friends, enjoy a reasonably priced drink from Mrs Hudson and laugh your socks off at the ‘silent movie’ stances and ‘unusual’ accents and if you get there a little early you might be lucky enough to enjoy a game of charades.