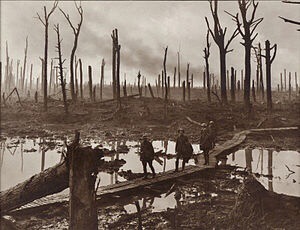 Descendants of those who fought at the Third Battle of Ypres will be invited to the Commonwealth War Graves Commission (CWGC) Tyne Cot Cemetery in Belgium to mark the centenary of the Battle of Passchendaele, the Culture Secretary Karen Bradley announced today.

The commemoration of the Third Battle of Ypres, commonly known as Passchendaele, will start with a traditional Last Post Ceremony at the CWGC Menin Gate in Ypres on the eve of the centenary, 30 July. The ceremony will give thanks to those who have remembered the British and Commonwealth involvement and sacrifices every evening in peacetime since 1928.

It will be followed by a series of live performances, open to thousands in Ypres’ rebuilt Market Square, that tell the story of the Battle. Images and film will also be projected onto the town’s famous Cloth Hall.

On the 31 July 2017, the first day of the Third Battle of Ypres, the focus will shift to the 12,000 graves and 35,000 names on the Memorial Wall to the Missing at the CWGC Tyne Cot cemetery, which bears witness to the ferocious battle.

While the Somme holds a powerful place in the national psyche today, during the First World War, Passchendaele and Ypres were household names. The battlefield is closely associated with terrible fighting conditions, and was the first time poison gas was used in battle on the Western Front. The story of Joey the War Horse, was set in this part of the Western Front. And Harry Patch, who became known as the Last Tommy, was conscripted and fought at Passchendaele.

The event will also be shown live on large screens in the Market Square at Ypres and at the Zonnebeke Chateau Grounds, so that those not able to secure a ticket will still be able to attend the public event on 30th July, and watch the Tyne Cot event on 31 July.

“As the War recedes into the distance, it is our responsibility to not only mark the years that have gone past, but to keep alive the memories of those who sacrificed so much. I encourage all of those with family who fought at Passchendaele – The Third Battle of Ypres, to apply for tickets to the commemorations this summer.”

Descendants wanting to honour their relatives where they fought and died can:

Attend the ceremony at Market Square Ypres on 30 July 2017 for the evening of live performance and music with image and film projected onto Cloth Hall, rebuilt from rubble.

Apply for tickets to the commemoration at CWGC Tyne Cot on 31 July 2017.

Enter a sub-ballot for a very limited number of places at the CWGC Menin Gate.

The public ballot is for tickets to attend the commemorative event at CWGC Tyne Cot Cemetery on 31 July 2017. The 4,000 tickets will be allocated in pairs, free of charge. Descendants can apply online at www.passchendaele100.org before 24 February 2017.

An EPIC new view of our planet

Winds of rubies and sapphires strike the sky of giant planet

Getting wet this summer? Blame the jet stream