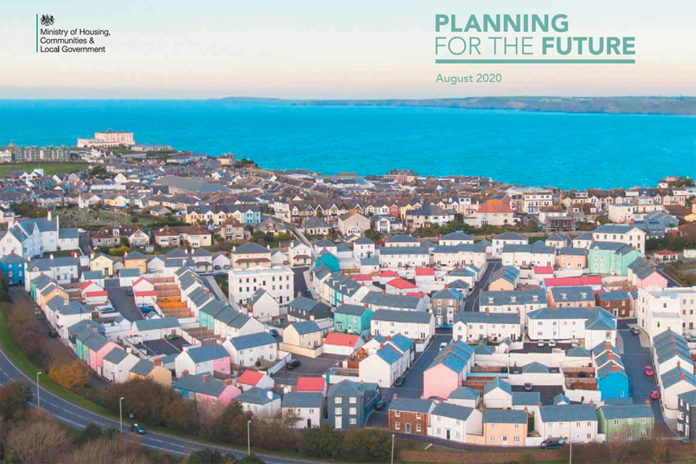 The Government has unveiled a dramatic shake-up of English planning laws designed to trigger a new wave of rapid house building.

The new proposals will change  how new developments are approved, speeding up construction times by stripping local councilors of their power to block proposals in some parts of the country.

Boris Johnson says 21st-century England is “being artificially constrained” by an “outdated and ineffective planning system” which “is no longer fit for human habitation.”

The changes,say the Government,will transform a system that has long been criticised for being too sluggish in providing housing for families, key workers and young people and too ineffectual in obligating developers to properly fund the infrastructure – such as schools, roads and GP surgeries – to support them.

Valued green spaces and Green Belt will continue to be protected for future generations, with the reforms allowing for more building on brownfield land.

The current system has shown itself to be unfavourable to small businesses, with the proportion of new homebuilding they lead on dropping drastically from 40 per cent thirty years ago to just 12 per cent today. Recent studies show smaller firms feel the complexities of the planning process and its associated risks, delays and costs are the key challenges they face in homebuilding.

“Our complex planning system has been a barrier to building the homes people need; it takes seven years to agree local housing plans and five years just to get a spade in the ground.

“These once in a generation reforms will lay the foundations for a brighter future, providing more homes for young people and creating better quality neighbourhoods and homes across the country. We will cut red tape, but not standards, placing a higher regard on quality, design and the environment than ever before. Planning decisions will be simple and transparent, with local democracy at the heart of the process.

“As we face the economic effects of the pandemic, now is the time for decisive action and a clear plan for jobs and growth. Our reforms will create thousands of jobs, lessen the dominance of big builders in the system, providing a major boost for small building companies across the country.”

The Housing Secretary also confirmed today that The First Homes scheme will provide newly-built homes at a 30 per cent discount for local people, key workers and first-time buyers. The discount will be locked into the home in perpetuity, ensuring future buyers can continue to benefit from it.

A new and simpler system of developer contributions will also ensure private firms play their part in funding the new infrastructure and Affordable Homes that should accompany new building. Section 106 agreements and the Community Infrastructure Levy will be replaced with a new Infrastructure Levy that will be a fixed proportion of the value of the development, above a set threshold, helping to deliver more affordable housing.

Revenues would be spent locally on projects such as new roads, upgraded playgrounds and discounted homes for local, first-time buyers.

The CBI says the reforms “will allow housebuilders to get to work.”

The Royal Institution of Chartered Surveyors called the moves a “big step in the right direction.” Presumably housebuilders will be thrilled, though we’ve heard nothing direct from them as yet.

However The Royal Institute of British Architects said the “shameful” proposals to water down oversight will do “almost nothing to guarantee the delivery of affordable, well-designed and sustainable homes.

Salford Coincil approved 20,000-plus homes which developers haven’t built. It is not planners stopping new homes but alack of investment

BELLE VUE are going flat-out for track glory by joining forces with HideOut!