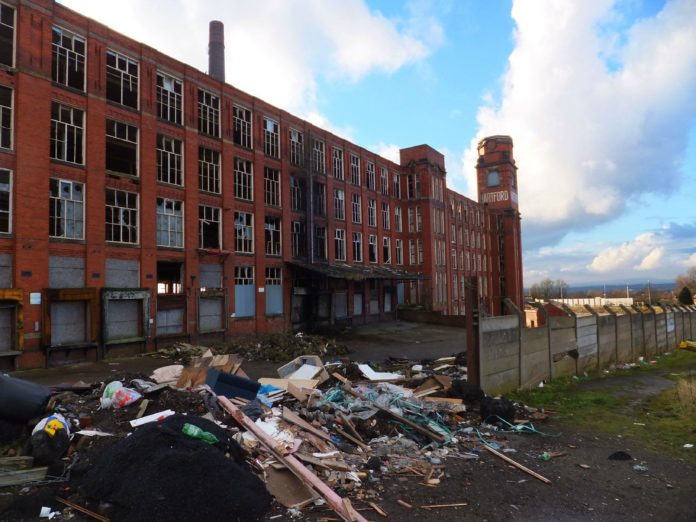 The government has formally agreed with Oldham Council Planning Committee’s decision to approve the demolition of Hartford Mill – signalling the start of a major housing and regeneration project in Werneth.

The Ministry for Housing, Communities and Local Government has confirmed that the owner can now knock down the entire building.

This is because redevelopment would outweigh the loss of the listed building due to its poor state of repair and continuing blight on the local area.

In January this year Oldham Council’s planning committee approved proposals to demolish all of the building, which is privately owned.

The decision was referred to the Secretary of State as it involved the complete demolition of a listed building.

Built in 1907, Hartford Mill ceased cotton spinning in the 1950s and was then later used by Littlewoods until 1991.

Vacant since then, the structure has deteriorated over time and has attracted intruders, vandalism, anti-social behaviour and fly-tipping.

Despite being marketed for a range of potential future uses over the last 27 years, the owner was unable to secure a scheme for its re-use.

The council submitted the application making the case for the building to be demolished and now the owner can get on with the job of removing this eyesore.

Councillor Sean Fielding, Oldham Council Leader, said: “This is great news as the demolition of the mill is long overdue. I’m pretty sure the vast majority of residents would agree as it’s been a blot on the landscape for years.

“The building had become dangerous and was a drain on resources, not just for the council but also others, such as the emergency services which were constantly being called out.

“This is also a brownfield site and now we can start looking forward to its future and development – improving things for existing residents and those who will be moving into the area once quality new homes are built.”