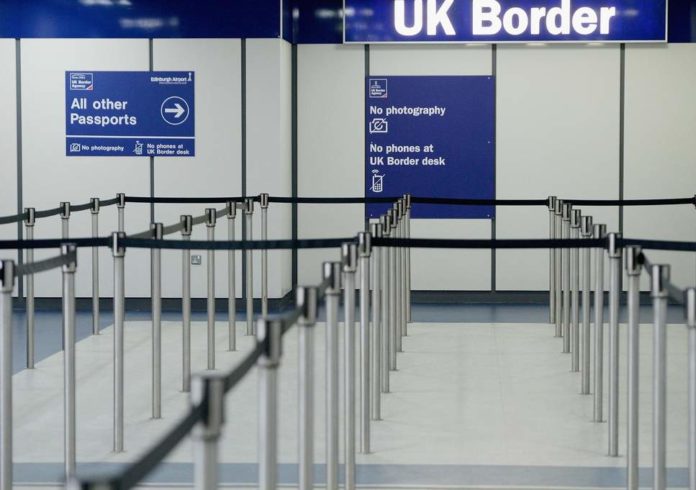 In a White Paper published this afternoon, Low-skilled workers from EU countries will no longer have the automatic right to work in the UK after Brexit, under the proposed new immigration rules.

The proposals say the government,will introduce a new route for skilled workers which favours experience and talent over nationality.

“It will enable employers to have access to the skills they need from around the world, while ensuring net migration is reduced to sustainable levels.”

The proposals will mean that everyone will be required to obtain a permission if they want to come to the UK to work or study.

There will be no cap on the numbers of skilled workers after Brexit but the government will set targets.

Those who enter under the new system will have no “right to access to public funds, or to settle” said Javid.

The new system will favour skilled workers. The government says the policy “will ensure the UK remains a hub for international talent from the EU and the rest of the world”.

However the Home Secretary Sajid Javid has admitted that a new Government plan for immigration does not include a “specific target” for reducing numbers of people coming to the UK.

Mr Javid was repeatedly asked during an interview on BBC Radio 4 whether a new White Paper stuck to a Tory manifesto to cut migration from the “hundreds of thousands to tens of thousands”.

Among the proposals are the 12-month visa will provide access to the labour market, but no access to benefits.

People arriving on this route will not be able to bring family members with them, won’t accrue rights to settle in the UK and will have a 12-month cooling off period once their visa expires.

“The Government has disgracefully labelled workers on less than £30,000 as low-skilled. Our economy and public services are kept ticking by this majority of workers.

“The Government is not, as it wrongly claims, using skills-based criteria to meet the needs of our economy and our society. It is using an income-based system which allows derivatives traders free movement but which excludes nurses, social care workers and other professions in which we have severe skills or labour shortages.

“The Tories are, once again, using crude anti-migrant rhetoric to try to cover up for their abject failure of managing the economy and the Brexit negotiations.”

“A new immigration system must command public confidence and support the economy. These proposals would achieve neither.

“The proposals outlined in the White Paper don’t meet the UK’s needs and would be a sucker punch for many firms right across the country. The Government’s own analysis suggests people and regions will be poorer as a result of them.

“The Government cannot indulge in selective hearing. It tunes in to business evidence on a disastrous Brexit no deal, but tunes out from the economic damage of draconian blocks on access to vital overseas workers.

“The facts are clear. Brexit is cutting off the ability to recruit and retain staff for 9 out of 10 firms. Despite firms spending over £45 billion in training each year, staff shortages are already biting. Hospitals, housebuilders and retailers are all struggling to find the people they need at salaries well below £30,000.

“These proposals must change. And when a new system that will work is agreed, the UK must be given time to adapt. This means at least two years to implement the changes after the rules are finalised.

“Further consultation is needed to get this right for the whole of the UK, otherwise calls for devolved and regional immigration policies will only grow louder.”

On the Government’s proposal for lower-skilled visas, Josh said:

“All skill levels matter to the UK economy. A temporary 12-month route for overseas workers earning under £30,000 would encourage firms to hire a different person each year. That needlessly increases costs and discourages migrants from integrating into local communicates – a key social concern. It’s not good for the public or business.”

“The ambition to streamline the visa system absolutely must be delivered on. Business needs to see concrete proposals and a commitment to implement simplifications at the same time as any new controls.”

On the timings of a new system, Josh said:

“The Government must not introduce a new system in 2021 that isn’t workable until 2025. Any new approach will be a major change to the labour market, and firms must have time to adapt.”

“To secure the best trade deals around the world, the UK must be willing to put migration and labour market access on the negotiating table – starting with the EU, our most significant trading partner. Failing to recognise this will hamper efforts to secure the UK the best trade terms possible.”