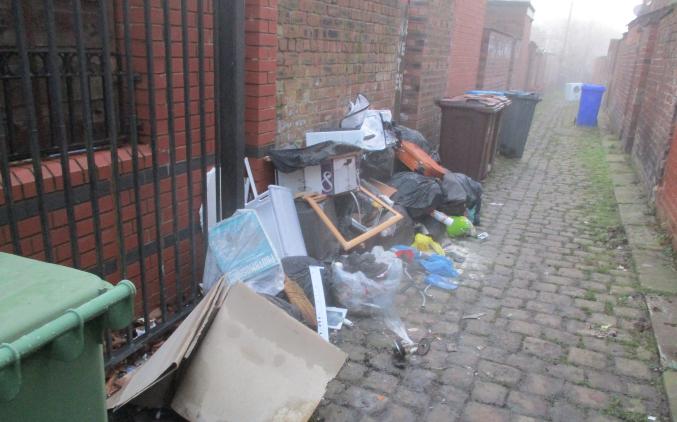 A woman from Gorton has been ordered to pay £1,850, after being found guilty of six counts of illegally dumping waste outside her own home.

Following an investigation by Manchester City Council, Naomi Thompson was fined £1,500 and ordered to pay £320 in costs, plus a £30 victim surcharge.

After a case of waste being dumped in an alleyway behind Rushton Grove was reported to the council for clearance and investigation in September 2018, officers from the council’s waste contractor, Biffa, searched the waste and found evidence to link the offence to Thompson.  A second case was reported in October 2018 and was again linked to Thompson through evidence discovered within the waste.

The council’s Environmental Crimes team wrote to Thompson to explain that action would be taken, but received no response.

After string of further offences were uncovered by Biffa’s investigations team in the same area – all of which were linked to Thompson – she was asked to attend an interview under caution on three separate occasions.

Thompson ignored all correspondence from the council and continued her pattern of offending.  In total, waste was discovered and cleared on more than 15 occasions.

In July 2019, Thompson was informed that she would be prosecuted for the offences.

Thompson, 26, of Rushton Grove, did not attend a hearing at Manchester Magistrates Court on 2 January 2020 and was convicted in her absence.