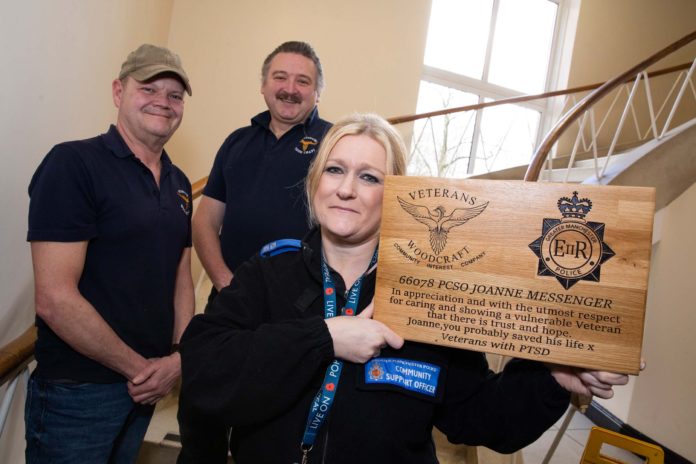 PCSO Joanne Messenger is one of GMP Trafford’s armed forces champions and was on a normal shift when she came across a military veteran in need of support.

Joanne spent hours with the veteran to see how she could help and she was determined to find him more suitable accommodation. She eventually found a place, through Catterick, but the accommodation was in Durham. The next challenge was to arrange for transport to get him there. Despite her best efforts she could not find anyone to fund the £25 train fare, so she paid out of her own pocket. She was later reimbursed by a local organisation and she got her money back.

Joanne’s story was shared on social media where it was noticed by Ted Grander, who himself is a veteran and runs his own company, Veterans Woodcraft. He was so touched by the story that he wanted to carve a wooden plaque to thank her on behalf of all veterans.

Ted Grander from Veterans Woodcraft was invited to come to GMP to present the plaque to Joanne in person. Ted said: “I visited Greater Manchester Police at Stretton HQ today to present a plaque to Joanne, as a personal thank you from veterans.

“Joanne found a veteran on the streets of Salford in freezing night time conditions. Joanne went over and above to find accommodation and paid the train fare as he had nothing.

“The thank you plaque we designed and created for Joanne is made out of Oak and is hand painted and lacquered. Thank you Joanne.”

Joanne explained that; “In this role we support people every day and I felt I had to help him in any way I could. In my personal life I am a carer and volunteer at an autistic group, so it’s just something I do without thinking about it.

“I am so touched by Ted’s gesture and the plaque, I was just doing my job but it is lovely to be recognised in such a way.

“I am happy that I could help the veteran on this occasion and wish him luck in the future.”