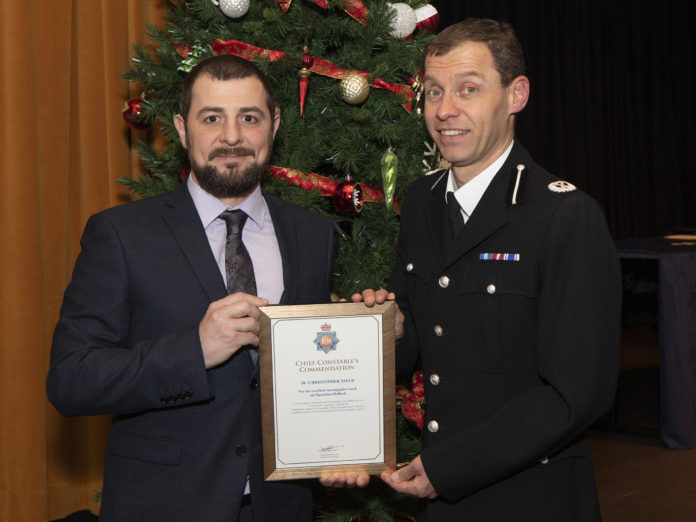 The ceremony took place on Tuesday 10 December at Hough End.

ACC Rob Potts said: “I always feel very privileged to present awards and read all of the stories behind the nominations.

“It is always great to recognise those that have gone above and beyond, often helping people when they are in their most vulnerable state.

“These awards are a reminder of the amazing work and dedication of GMP, and something to be extremely proud of.”

Detective Constable (DC) Chris Nield was among those awarded on the evening. DC Nield was presented with the Chief Constables Commendation in recognition of his outstanding work on Operation Helford; a Modern Slavery investigation.

Op. Helford was an extremely complex investigation, spanning over two years. DC Nield took ownership from the outset and quickly developed intelligence to identify an extremely dangerous individual, linked to a much wider criminal network known for targeting vulnerable victims from the Czech Republic.

DC Nield engaged with the Czech authorities to gain their support with the investigation and ultimately led to them taking on the case, which resulted in a successful prosecution. Chris worked tirelessly on the case right through to prosecution, not only arranging for UK victims to provide evidence, but also that each and every individual was supported throughout.

DC Chris Nield said: “I am honoured to receive such a prestigious award, and proud to be able to celebrate the evening with my wife and parents.

“Operation Helford really has been the highlight of my career and I owe it to many people who were involved along the way.

“The cooperation I received from various partners has been fantastic. Working with the Czech National Organised Crime Agency is something I won’t forget, and the several charities who have worked tirelessly to help get victims’ lives back on track. It has been really inspiring to see that real difference they make to people’s lives.

“But I really want to pay tribute to the determination of each of the victims in this case. It has been a long and traumatic journey for them. They should be very proud of themselves for standing up, and I wish them the very best for the future they deserve.

“It is such a privilege to be able to leave Greater Manchester Police on such a positive note after serving for 15 years, and I am now looking forward to an exciting future working in Cumbria Constabulary.”

Thank You Manchester Weekender – free festival of fun, thanks, and remembrance for all