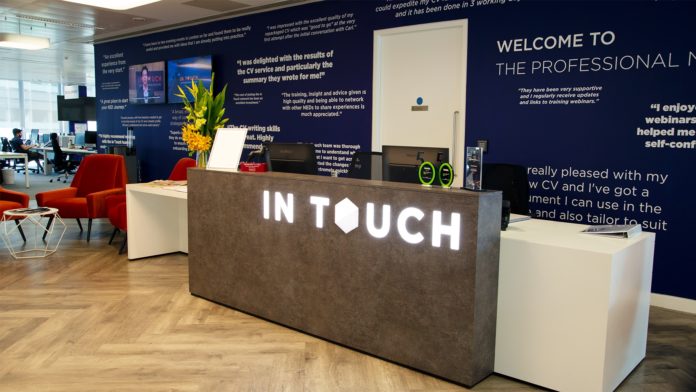 A Manchester-based global coaching and development network for business professionals, hailed as one of the UK’s fastest-growing companies, is set to increase its headcount in the city by more than 30 per cent.

In Touch, which is embarking on international expansion and opening up a series of offices across the world, is on the hunt for 40 talented individuals to join its growing head office team based in Hardman Square, Manchester.

The positions available are primarily in sales, business development, customer care and marketing, with In Touch’s in-house recruitment team also looking to welcome onboard further talented writers to help its thousands of members reinvent their CVs and job search collateral.

The recruitment push is being led by In Touch’s Head of Recruitment, David Mason and his team of talent acquisition specialists.

“We’ve come an incredibly long way since 2013 when In Touch had a team of just six people!” said In Touch CEO, Matthew Roberts. “But to be growing by another 40, on top of the existing 132 we have here in Manchester, is a real sign of the success we’re having as an international business.

“We’re earning ourselves a fantastic reputation not just for the way we’re disrupting the executive development and coaching market in the UK and abroad, but for the benefits, support and opportunities we offer our team and those who come to join us. We have some ambitious, hungry and talented people helping us to drive our business forward.”

“Although we’ve grown quickly, we’ve never compromised on the commitment we have to our people,” added Head of Recruitment, David Mason. “Our retention rates are always high; we’ve found that if people do leave, many will return to us really quickly and we’re lucky to have a lot of people interested in what we offer at In Touch. We’re excited to be welcoming so many more new people to our team in Manchester.”

In Touch is recognised as one of the UK’s fastest-growing businesses by Deloitte and the Financial Times and has recently announced its expansion into the USA.

The current job roles at In Touch are available by visiting the company’s LinkedIn site – https://www.linkedin.com/company/in-touch-networks/jobs/.

The Didsbury Business Games fundraiser is just a few weeks away