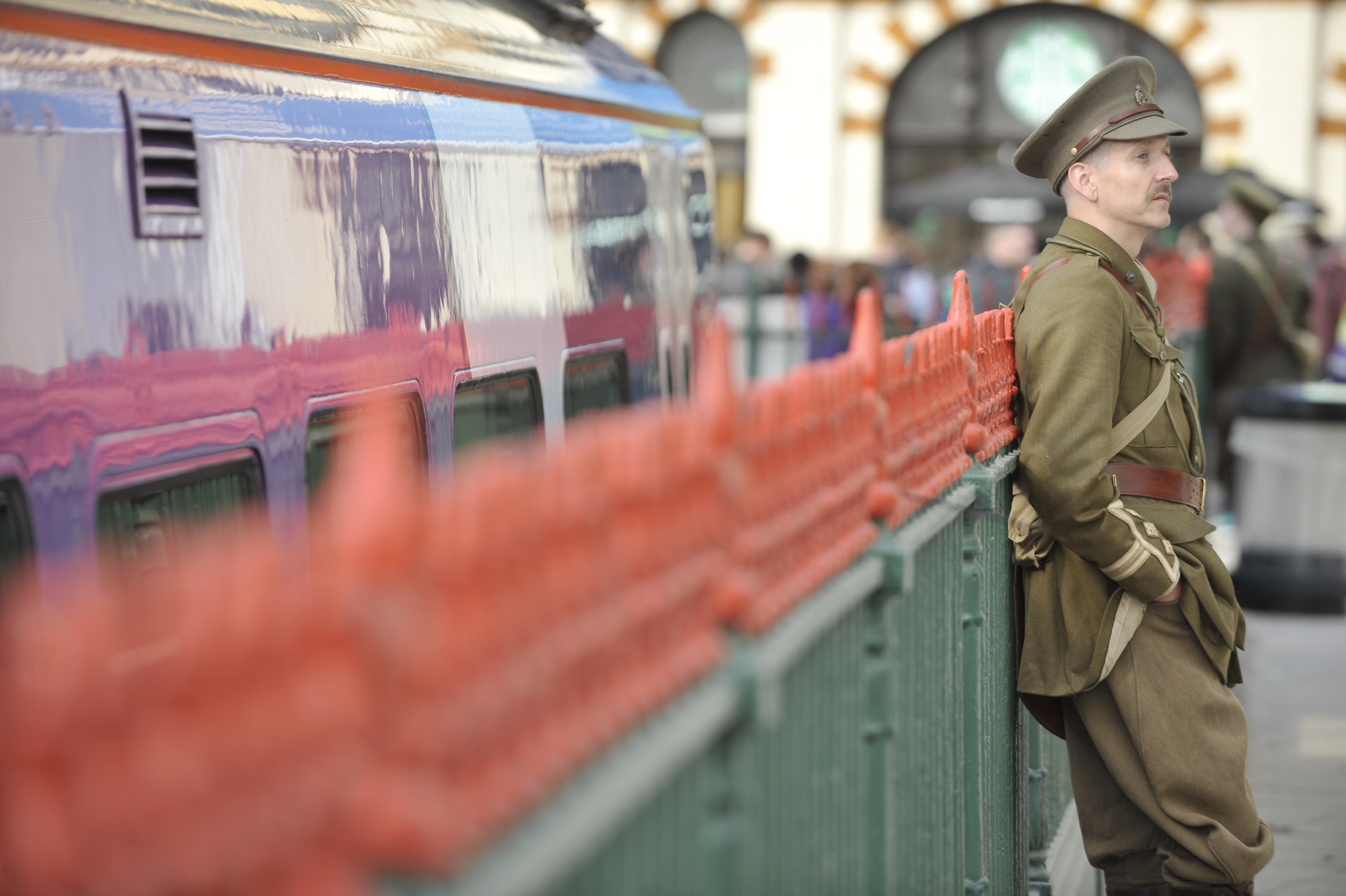 You may have noticed ghostly figures of World War One soldiers walking around Manchester today?

Well they were  part of a UK-wide event that took place today, 1 July 2016, as a modern memorial to mark the centenary of the Battle of the Somme.

Commissioned by 14-18 NOW, the UK’s arts programme for the First World War centenary, the work was conceived and created by Turner Prize-winning artist Jeremy Deller in collaboration with Rufus Norris, Director of the National Theatre.

Actors from several Manchester Theatres were involved including the Royal Exchange and its partners Bolton Octagon, LeftCoast (Blackpool), Oldham Coliseum and Storyhouse (Chester).

The specially commissioned event saw around 1500 voluntary participants dressed in First World War uniform appear unexpectedly in locations across the UK. The Royal Exchange was one of 27 organisations which collaborated on the work, called ‘we’re here because we’re here’.

The project breaks new ground in terms of its scale, breadth, reach and the number of partners and participants involved. This is the first time three national theatres have worked together on a joint project, and the first time so many theatres have worked together on a UK-wide participation project.
The participants who walked the streets today were a reminder of the 19,240 men who were killed on 1 July 1916, the first day of the Battle of the Somme. Each participant represented an individual soldier who was killed that day. The work is partly inspired by tales of sightings during and after the First World War by people who believed they had seen a dead loved one.

The participants wore historically accurate uniforms, representing 15 of the regiments that suffered losses in the first day of the Battle. The soldiers did not speak, but at points throughout the day would sing the song ‘we’re here because we’re here’, which was sung in the trenches during the First World War. They handed out cards to members of the public with the name and regiment of the soldier they represented, and, where known, the age of the soldier when he died on 1 July 1916.

The daylong work ran from 7am to 7pm and covered the width and breadth of the UK, from Shetland to Penzance. Sites they visited included shopping centres, train stations, beaches, car parks and high streets – taking the memorial to contemporary Britain and bringing an intervention into people’s daily lives where it was least expected.

The volunteers were men aged between 16-52, reflecting the men who would have fought in the Somme. They were not trained actors but come from a range of professions, including a sheep farmer, flight attendant, doctor, lawyer, social worker, shop assistant, portrait artist and GCSE student. They came together to rehearse in theatres across the UK over a month-long period in the run-up to the performance. ‘we’re here because we’re here’ is one of the largest arts participation projects ever staged in the UK, with hundreds of additional volunteers working behind the scenes.

“I wanted to make a contemporary memorial to mark the centenary of the Battle of the Somme, one that moved around the UK with an unpredictability in which the participants took the work directly to the public.”

“This work by Jeremy Deller is a truly national piece of theatre and is a powerful way to remember the men who went off to fight 100 years ago. I also hope it will serve as a catalyst to strengthen ties with theatres and communities across the UK.”

Jenny Waldman, Director of 14-18 NOW, said:
“1 July 1916 saw 57,470 casualties on the first day of the Battle of the Somme, of whom nearly 20,000 died: it was the bloodiest day in British military history. Taking part in ‘we’re here because we’re here’ has given hundreds of young people across the UK the chance to find out more about the Somme, and in some cases discover the stories of family members who fought in the war. Working alongside brilliant artists, directors and theatres on this astonishing project will be an experience they will never forget.”

Sarah Frankcom, Artistic Director Royal Exchange Theatre, said:
“When I was asked if the Exchange wanted to be involved in this project the answer was easy – Yes. Jeremy Deller has created a powerful and provocative performance which the whole of the UK can experience together in a single day. It has been an incredible opportunity for our participants and an extraordinary way for them to find out more about the Somme and to share it with people across the whole of the North West. It has also been a great way to cement relationships with arts organisations across the country.”

Huge spike in burglaries at University of Manchester