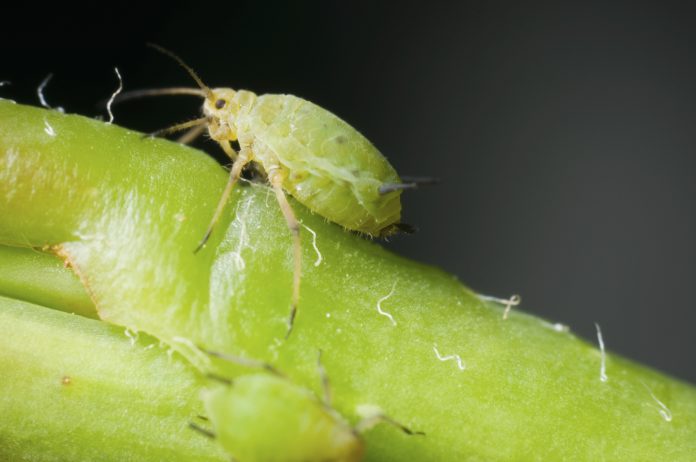 A scientist from The University of Manchester has hit upon an innovative way to control greenflies which infest our gardens and farms.

Dr Mouhammad Shadi Khudr, discovered that living lacewing insects- which are used as a way to biocontrol greenflies – are also effective after they have died.

Dr Khudr, an evolutionary ecologist based at the University’s Division of Evolution and Genomic Sciences, discovered how genetic variations in greenflies’ respond to the fear of predation by lacewing – known as aphid lions.

The  greenflys’ genetic variation and life history influenced how they responded to traces of their predator.He hit upon the discovery while looking at how different lineages of one species of greenfly responded to lacewings on a crop.

Even though each greenfly line had a distinct way of responding to the exposure to the traces of the aphid lion –they all suffered from dramatic reduction in their reproduction, he says.

Dr khudr designed and lead the collaborative research, which was funded by the Freie Universität Berlin (Free University of Berlin).

The research is published in the journal Scientific Reports.

He said: “Whether alive or dead, lacewings make it more difficult for aphids to reproduce.The smell and visual impact of dead predators reduce the greenflies’ capacity to give offspring and the way they clump together on the plants they infest.”

He added: “This approach is at the crossroads of agricultural, evolutionary and ecological science.It is a unique way of understanding the effect of genetic variability corresponding with the risk of predation and thus should receive much more attention.

“It has organic, easy to produce and affordable applications and thus has a promising potential to help solve an age old problem which frustrates many gardeners.

“And it would be most interesting to see if this approach might also work with other pests and biocontrol agents in other agricultural systems.”