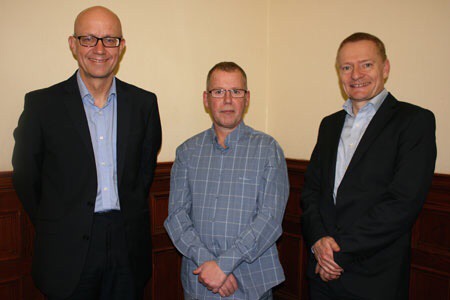 The road sweeper driver has worked the night shift for 19 years, cleaning streets while the rest of Tameside sleeps.
Dad-of-two Mark, 49, was following the footsteps of both his father and his grandfather when he started working for the Council aged 30. His father, Phil Scragg – more latterly known as Phil Sheridan – was a cleansing supervisor and his grandfather Alf Title worked at the former depot in Ashton.

Mark said: “Dad was my boss when I first started but I rarely saw him as he worked days I worked nights.I like the night the shift – not just because I escape babysitting duties at home but because you see the borough with different eyes.

“It’s always really busy, you can be dealing with anything while street sweeping from cleaning up after road traffic accidents to reporting anything of concern – I once saw a giant teletubbie fast asleep in the middle of a pavement.There’s also a good team spirit and bond with my colleagues and the emergency control team. We’re the eyes and ears of the Council while everyone else is at home.”

Mark was one of the members of staff who worked through the night to help out following the November floods and was among the staff invited to the Mayor’s parlour this week to thank them for their role in the clean-up.

“It was really busy, my phone never stopped – I had never seen flooding like that in Tameside in 19 years,” he said.

Mark told how his grandfather, Alf, was particularly proud that he had carried on the family tradition of working for the Council.

“When he was still alive, he used to like me telling him what was going on at work. I feel proud that I’m doing something positive that my grandad would have been proud of.”

Head of Environmental Operations Nick Sayers said: “Mark’s role is so important and yet it is invisible to many – while everyone is at home asleep he and his nightshift cleansing colleagues are out there making sure we wake up to a clean and tidy borough. They do a great job and Mark rightly made his grandfather proud.”

Private members bill to lower the cost of school uniforms for hard up families...

Jury trials to resume this month.