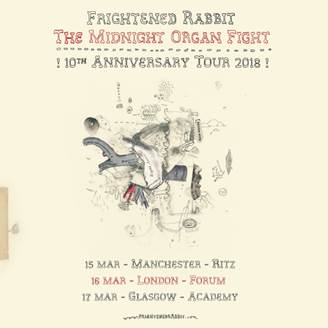 Scotland’s favourite sons Frightened Rabbit have today announced a 10 year anniversary tour of ‘Midnight Organ Fight’, which will see the band play their seminal album in full for the very first time.

Taking place across three days in March 2018, the tour will kick off in Manchester on the 15th , at the O2 Ritz, taking in London’s ‘Forum’ on 16th, and finishing up with a homecoming show at Glasgow’s O2 Academy on the 17th. Tickets are available via pre-sale this Wednesday (1st November) and general sale on Friday 3rd November.

The band had this to say – “This album holds a dear place in our collective heart. It was the one that allowed us to believe that we could do this band thing. Really do it. It’s the one that made the people in front of us SING. Really sing. It’s the album I still talk about most with people I meet at our shows. The wee bugger will not go away, and we are alright with that.”

Frightened Rabbit released their critically acclaimed fifth studio album ‘Painting Of A Panic Attack’ in April 2016, their second major label output via Atlantic Records following 2014’s UK Top 10 achieving ‘Pedestrian Verse’. This autumn saw the band heading out on tour in the US with Broken Social Scene, concurrently releasing their ‘Recorded Songs’ EP (including ‘How It Gets In’ ft. Julien Baker).

Russell Watson special gig at The Stoller Hall, Manchester, part of ‘PASSPORT: BACK TO...