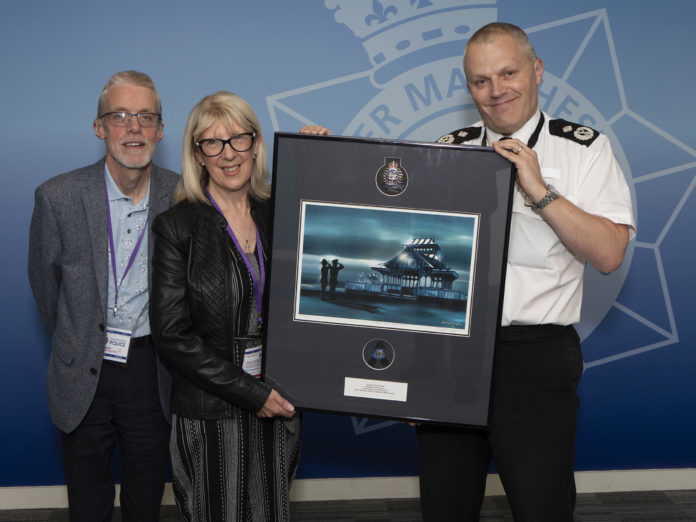 A memorial image has been presented to the family of a former GMP police officer who died on duty in Canada.

In 2006, PC Dan Woodall made the decision to relocate to Canada where he became a police constable at Edmonton Police Service. On 8 June 2015, PC Woodall and colleagues were attempting to arrest a local resident on suspicion of harassment and hate crimes.

As they approached the door to apprehend the suspect, an armed gunman opened fire and PC Woodall was fatally injured. He was thirty five when he died, leaving behind a widow and two young sons.

To honour PC Woodall, Edmonton Police Service, in conjunction with the charity Police and Peace Officers’ Memorial Ribbon Society, sent GMP a painting to commemorate his duty. This was given to PC Woodall’s parents, Denise and David Woodall, during an emotional presentation on Tuesday 21 May 2019.

Deputy Chief Constable, Ian Pilling said: “PC Woodall was an exceptional officer who fulfilled his service until the very end. His untimely death remains unbearably tragic for his loved ones and both GMP and Edmonton Police Service alike.

“The painting is a fitting tribute which honours PC Woodall’s life and service. It was a privilege to present this to his parents.”

Chief Constable of Edmonton Police Service, Dale McFee said: “The grief of losing Dan was felt worldwide. Friends, citizens and organisations stood up to show we are stronger together and hate does not belong in this world.

“On behalf of Edmonton Police Service, we give this gift to Dan’s parents and we reach out a hand to the Woodall family, who will always be members of the Edmonton Police family.”

One step closer to lessening our dependence on fossil fuels,