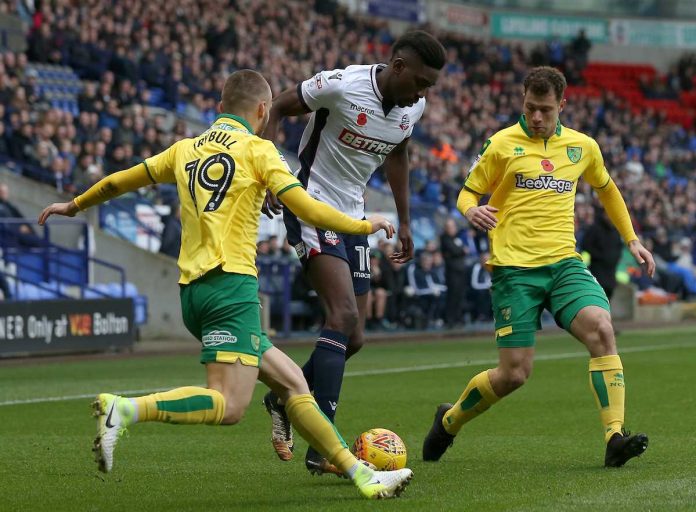 Bolton Wanderers made it five games unbeaten as they picked up their second league victory of the campaign with a deserved win against Norwich City on Saturday afternoon.

Gary Madine opened the scoring for the Whites in the 35th minute, with Adam Armstrong’s peach of a long-range effort five minutes later putting the home side in a commanding position while Josh Murphy’s injury time strike was simply scant consolation come full time.

Manager Phil Parkinson said: “It was important for us, it really was. We’ve taken nine points from the last five games which is a really good return and it’s the first time that we’ve headed into an international break off the back of a win.”

Our other local teams were in FA Cup action this weekend.

Rochdale Manager Keith Hill described his team’s performance as being very professional after his teams 4-0 first round win over Bromley at the Crown Oil Arena.

Bradden Inman put Rochdale ahead inside ten minutes and Ian Henderson doubled the lead from the penalty spot just after the half hour mark.Inman grabbed a third goal and his second shortly after the break, before Henderson completed the scoring six minutes from time.

“It was a very professional performance,” said Hill.

“I think we could have been two goals up before we scored. The scoreline at half-time should probably have been more.

“But the performance was very professional because of the respect we gave the opposition. Fair credit to Bromley – they didn’t make it easy. I think we made it look easier than it was, because we were willing to match the opponents with all the ingredients that you need – courage, running, commitment and being forgiving, and we were good with and without the ball.

Wigan boss Paul Cook was pleased to his side get through a difficult tie against non Crawley Town as goals from Ivan Toney and Lee Evans secured a place in the Second Round of the Emirates FA Cup.

Bury have to do everything again after they drew at non league Woking which saw Shakers legend Ryan Lowe handed the managerial reins, assisted by Youth team manager Ryan Kidd, by Chairman Stewart Day as the search for the Shakers 39th permanent manager commenced.

They couldn’t have got off to a better start, Michael Smith putting them ahead after just forty five seconds but Woking got back into the game in the 24th minute, Jamie Philpot rose high above the defence to plant a firm header, from seven yards, past Fasan into the top left hand corner of the goal.

The replay between the two sides scheduled to take place at The Energy Check Stadium at Gigg Lane on Tuesday, 14th November at 7:45pm.

Oldham’s participation in the cup ended at the first attempt where despite a spirited comeback with goals from Peter Clarke and Aaron Amadi-Holloway, Carlisle United put three past the Latics.

New manager Ritchie Wellens said :”I’m massively disappointed, it’s a real tough one because we can’t criticise the players, their attitude was spot on.”