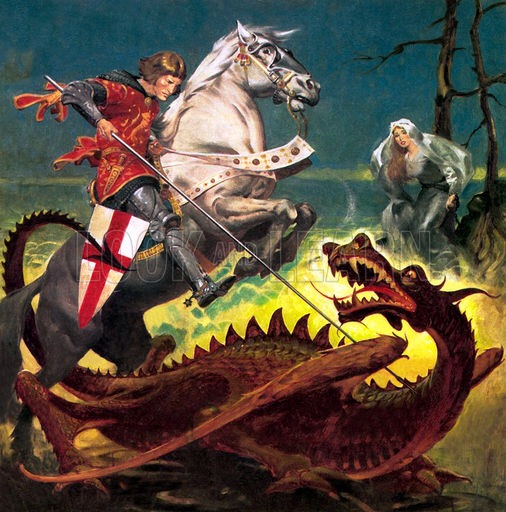 The celebration of St George’s Day is currently fairly low key in England and much more celebrated elsewhere especially in the Orthodox East and while it is highly unlikely that St George ever visited England or for that matter slayed a fire breathing dragon, should we celebrate?

He was, most historian’s now agree,  born in Cappadocia in what is now Turkey, in about the year 280 AD. It is probable that from his physical description, he was of Darian origin, because of his tall stature and fair hair. He enlisted into the Cavalry of the Roman Army at the age of 17, during the reign of the Emperor Diocletian and very quickly established a reputation amongst his peers, for his virtuous behaviour and physical strength and quickly achieved the rank of Millenary or Tribunus Militum.

Said to be a favourite of the Emperor Diocletian, who was at the time attempting to rejuvenate the morale of the citizens of Rome by reviving the prevailing traditions and paganism of Rome against the increasing influence of Christianity, St George found himself caught between the Emperor and his faith.

When a plot against the life Of Diocletian’s second in Command Galerius, an edict was issued that all Christian Churches were to be destroyed and all scriptures to be burnt and anyone admitting to being a Christian, would lose his rights as a citizen.

St. George acted to limit the excesses of Diocletian’s actions against the Christians, travelling to the city of Nicomedia where, upon entering, he tore down the notice of the Emperor’s edict. He would be thrown into prison with instructions that he be tortured until he denied his faith in Christ.

He was beheaded at Nicomedia  on the 23rd of April in the year 303 AD, his head carried to Rome, where it was preserved in the Church that is also dedicated to him and was beatified by the Roman Catholic Church.

It was in Eastern Europe that he was first revered, becoming  known in Russia and the Ukraine as the Trophy Bearer but he also became the spiritual inspiration of the Crusaders with the pennant or flag with a red cross on a white or silver background became prominent as a means of recognition by English Knights.

His English connections began in 1348 when King Edward Ill established the Knights of the Garter, the oldest order of Chivalry in Europe, dedicating it  to the Blessed Virgin Mary, Edward the Confessor and St George.

Its insignia consisted of a collar and badge appendant known as the George, the Star, the Garter and the Sash with the Investment Badge called the lesser George. This is a gold and richly enamelled representation of St George on horseback slaying the dragon.

He became England’s patron saint in 1415 following Henry V victory over the French at Agincourt, commemorated in Shakespeare’s rousing speech.

As for the dragon, it originates from The legends about St George that spread far and wide and it was claimed that near the town of Silene in Libya, a dragon dwelt, keeping the population in terror. To satiate him the population tethered an animal, until they had no more.

They then provided human sacrifices and in ultimate desperation, a young princess was selected, the king’s daughter named Cleolinda. The story then relates how St. George rode up on his white charger, dismounted and fought the monster on foot; until it eventually succumbed.

He then dragged the dying monster into the city, using the girdle of the Princess and slew the dragon in front of the people. St. George was greeted as their saviour and the King offered him a bag of gold as a reward for saving his daughter. This he refused and asked that it be given to the poor.

For many people our saint’s day passes with little thought.Unlike St Patrick or St Andrew, St George does not symbolise the national character.While recent years have seen calls for a national holiday, the flag is seen in some quarters as having racist overtones.Others put our non celebrations at the door of the reformation when the country stopped celebrating Saint’s Days.

Manchester job seekers score an own goal on social media

On Manchester, particle physics and why the God Particle is just a hype