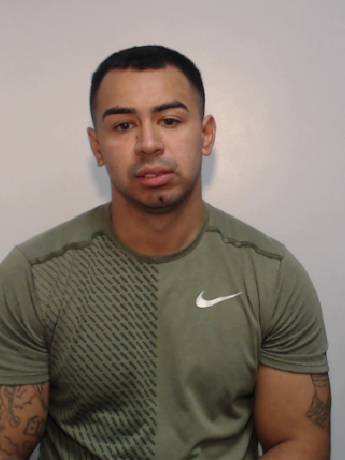 Police found 2.5 kilos of cocaine, half a kilo of crack cocaine, 860g heroin and 861g of MDMA when they searched a drug safe house in Whitefield as part of Operation Reagan – an investigation into the supply of drugs and firearms in Manchester.

The operation identified five key players in the organised crime group who were responsible for supplying class A drugs, and a ‘safe house’ used by the group in Whitefield was put under police surveillance.

In June last year, one of the defendants Mohammed Sarwar was observed leaving the ‘safe house’ and placing packaging into a wheelie bin in Prestwich.

When police searched thegroup’s ‘safe house’ in Whitefield. In a cupboard under the stairs, officers discovered 2.5 kilos of cocaine, half a kilo of crack cocaine, 860g heroin and 861g of MDMA. Drug paraphernalia relating to drug supply was also found in the house.

Hidden inside a bag in the downstairs cupboard was an Uzi sub machine gun and ammunition. A forensic examination later identified DNA from Clements on the gun.

The group were arrested for their involvement in the conspiracy in September 2019. In Frost and Lee’s flat, officers found ¼ kilo of cocaine, £34,000 in cash and a cash counting machine. In Marcel Madden’s home address half a kilo of MDMA was recovered.

Jordan Clements,27,of Byron Terrace, Failsworth pleaded guilty to conspiracy to supply cocaine, heroin and MDMA, possession of a prohibited weapon and possession of criminal property and sentenced to a total of 15 years in prison.

Mohammed Sarwar,also 27,of Perth Avenue, Chadderton pleaded guilty to conspiracy to supply cocaine, heroin and MDMA and sentenced to six years and nine months in prison.

Anthony Frost,27,of Silsden Walk, Salford pleaded guilty to conspiracy to supply cocaine, money laundering and failure to supply a phone pin to police and sentenced to eight years and four months in prison.

Detective inspector Lee Griffin of GMP’s Serious and Organised Crime Group, said: “During the course of the investigation the group were observed and the key players responsible for conspiring to bring multiple kilos of cocaine, heroin and MDMA to the streets of Manchester were soon identified.

“Drugs are destructive and blight our communities, and as a result of this operation these men are now behind bars where they should be.

“If you have any information about this type of criminality in your community then come forward to police so that we can tackle this issue and make our streets a safer place to be.”