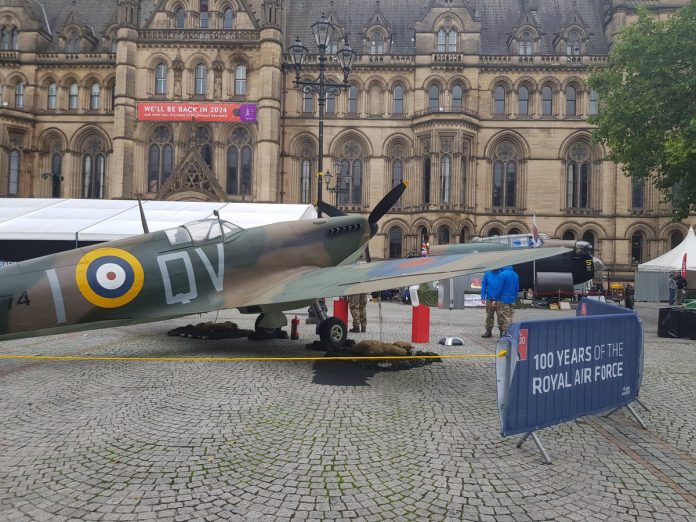 An extraordinary display of RAF aircraft opened at Manchester’s Albert Square today  as the Royal Air Force continues to celebrate its 100th birthday.

To mark the Manchester Tour, five iconic aircraft, the Sopwith Snipe, Spitfire, Harrier, Typhoon and an iconic Lancaster Bomber fuselage will be free for the public to experience over the weekend.

The Lancaster has strong connections with Manchester and the North West having been built in the area. Veterans, service personnel, cadets and members of the public can share stories and learn about the RAF.

The Aircraft Tour will be open to the public on Friday 14st from 11am to 5.30pm and on Saturday 15st September and Sunday 16th September from 9am to 6pm.

The public will have access to all of the planes and to view the cockpit of the Typhoon, as the event reveals some of the UK’s most advanced military planes.

“As part of the RAF 100 celebrations, we are delighted to bring the RAF Aircraft Exhibition to Manchester. The exhibition showcases many of the RAF’s iconic aircraft from the last 100 years.

It also includes demonstrations of the importance of science and technology in today’s RAF, allowing you to try things out for yourself, also giving you the chance to meet some of today’s  RAF Servicemen and women.

Bringing the aircraft tour to the North West of England also recognises that many of the RAF’s most famous aeroplanes have been manufactured here, ranging from the world- beating Avro Lancaster bomber of World War 2, to the multi-role Eurofighter Typhoon aircraft of today.

Free school meals lead to a fall in childhood obesity