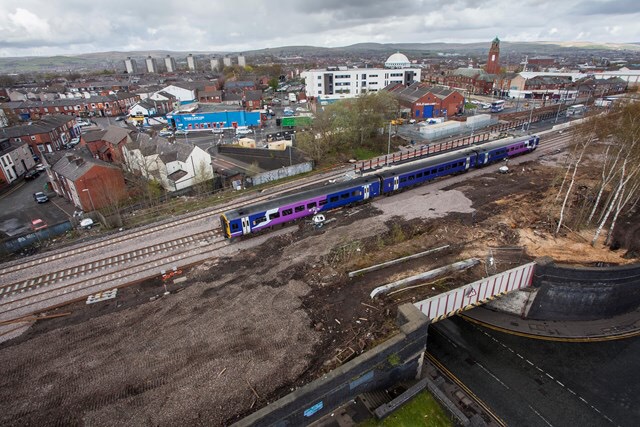 Trains between Littleborough and Manchester Victoria have returned to normal after five weekends of work to upgrade the railway were completed on time.
Network Rail’s orange army has worked round-the-clock each weekend over the past month installing 1,200m of new track between the two stations as part of work to bring Rochdale station’s new platform into use and eventually reduce journey times in the area.

As well as installing the new track, existing track has been remodelled between Manchester Victoria and Rochdale to link the new platform to the rail network as part of Network Rail’s £1bn+ Northern Programme investment in the north of England.

The railway reopened on Monday with trains running once again from the start of service.

The new platform will allow trains to turn back at Rochdale from Manchester Victoria, enabling more services between the two. This will mean fewer trains are stationed in Manchester Victoria, releasing capacity to help deliver wider benefits across the network and keeping more passengers moving. It will also allow faster services to pass through the station, improving journey time along the Calder Valley line which runs between Manchester and Leeds via Bradford.

Work to build the new 135m-long bay platform at Rochdale station began in January this year, with engineers working through the night when trains are not running and during the weekly Sunday closures of Manchester Victoria. Work will continue over the coming months as engineers complete surfacing work on the platform and install lighting, passenger information screens and fencing.

Terry Strickland, area director at Network Rail said: “I would like to thank passengers for their patience over the past five weekends while we worked to improve the railway between Manchester Victoria and Littleborough.

“The weekend closures have meant that our engineers have successfully installed 1,200m of track and remodelled the lines around Rochdale station to link in the new platform.

“The next phase of work which begins in summer this year is essential to commission the new platform at Rochdale. As plans are finalised, our main focus is ensuring that work causes as little disruption to the travelling public as possible.”

Alex Hynes, managing director at Northern said: “Investing in local improvements which provide network wide benefits for our customers is positive news. What has been achieved by the upgrade at Rochdale will spread service enhancements across the North West as well as into Yorkshire.
“Future-proofing the railway helps create more travel opportunities for communities in the long term and helps deliver even more of our customers to and from cities like Manchester and Leeds.”

The next phase of work will begin in summer to strengthen the main bridge into Rochdale station. Work to strengthen this essential structure to support three train movements is vital to bring the new platform into use. Engineers have taken advantage of the recent weekend closures to conduct bridge investigations on eight bridges along the route and an exact programme of work is currently being finalised.