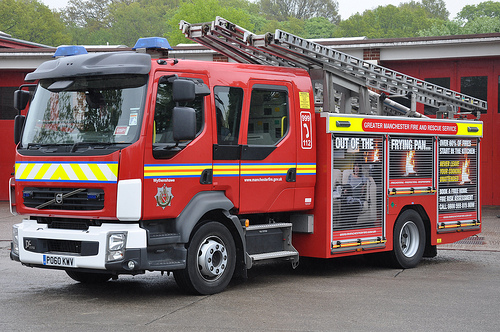 Fire fighters have been tackling a blaze in Oldham overnight.

The fire broke out at an industrial estate in Mossdown Road in the Heyside area of Oldham around 7.00pm on Sunday evening at the waste plant owned by the Connell Group.

Seven fire engines were in attendance at the fire on a  quantity of waste that had spread to a nearby building.

Residents were advised to keep their doors and windows shut while the fire raged but police later tweeted that there was nothing hazardous at the fire.

Firefighters wearing breathing apparatus used jets and ground monitors to tackle the blaze and are monitoring the fire with a thermal imaging camera.

Firefighters have worked through the night in Mossdown Road and  three fire engines and an aerial appliance remain at the scene this morning as large pile of waste continues to burn at the site.

Firefighters are liaising with the site owners and Environment Agency as they break down the waste pile and put water on any pockets of fire that remain.