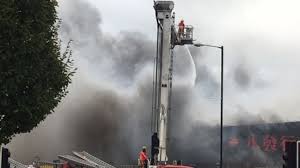 Greater Manchester firefighters  are still unable to enter the Chinese supermarket in Beswick devastated by fire more than 48 hours ago due to it being dangerous.

They also expect to continue to damp down and tackle hotspots overnight.

Access has been improved to the building due to contractors removing as much of the roof as possible, enabling firefighters from an aerial platform to dampen down any hotspots.

Meanwhile Ashton Old Road has partially reopened for traffic ahead of the evening rush hour.

Two lanes have reopened heading out of town, with traffic heading into town on one lane near to the incident as work continues.

All staff have been accounted for, all customer cars have been collected and no-one has been reported missing.

Earlier today local Residents were able to return to their homes.

Electricity to some homes is being provided by means of a generator.

North set to receive £2,389 less per person than London on transport