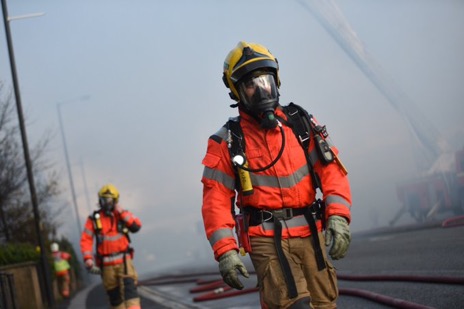 Firefighters battling a blaze at a Chinese supermarket in Beswick most of the afternoon are to remain at the scene overnight.

Residents who live at numbers 405 – 423 Ashton Old Road, as well as in Blocks 1 and 2 of Synergy Flats at 425 Ashton Old Road, will not be able to return to their properties tonight due to continued smoke from the fire.

A rest centre has been set up for anybody without anywhere to stay at:

All other properties in the area are safe to return to.

Firefighters will be stationed at the rear of Campbell House, Ashton Old Road to support residents with any concerns they have.

The blaze broke out at the Wing Fat cash and carry warehouse on Gorton Road this lunchtime.

At its height around 60 firefighters from 12 crews along with aerial units from Whitehill and Manchester Central, the technical rescue unit and enhanced rescue unit from Ashton and command units from Rochdale and Whitehill arrived at the scene.

The surrounding buildings were evacuated due to the size of the fire and the large amount of smoke in the area.

Crews are using an aerial appliance, two jets and eight breathing apparatus to fight the fire.

All staff at the shop have been accounted for.

Although the plume of smoke from the fire has significantly reduced but residents are still asked to keep doors and windows closed.

Ashton Old Road continues to be closed and motorists are asked to avoid the area and plan ahead for their journeys.

Due to the damage caused firefighters are unable to enter the building yet.

Officers at the scene are continually assessing the incident to see whether roads can be reopened, but ask for motorists to carry on avoiding the area.