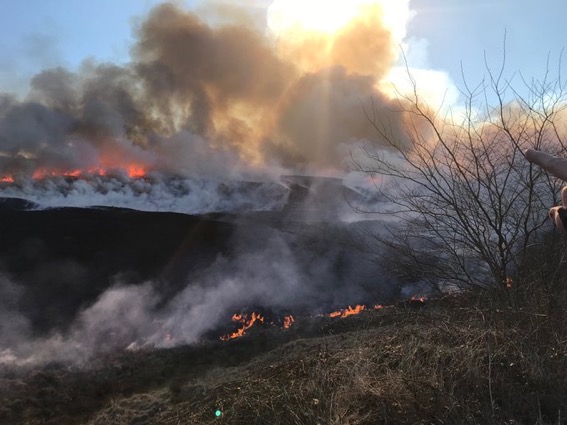 Firefighters from Lancashire and Manchester are currently battling a blaze on Winter Hill.

Eight fire crews are currently at the scene of the fire which broke out just after 2.00pm

The fire started near to Church Street, Belmont on the moor running between Rivington and Belmot.

The fire has burned a significant area prior to firefighters arriving at the scene and the fire is being wind driven, moving up from the blue lagoon side of the hill up the banking towards the monument on Rivington. Fire crews estimate that approximately 2km has been affected so far.

Flames have been seen at heights of approximately 6m and crews are currently working on extinguishing the fire using water due to the intensity of the fire. Firefighters are also working on creating fire breaks to prevent further spread of the fire.

People are advised to avoid the area so that emergency vehicles can get access. Anyone in the vicinity that is affected by smoke is advised to keep windows and doors closed as a precaution.

Firefighters have said that they have now managed to contain the fire.