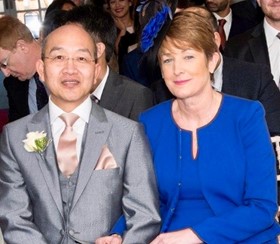 The family of a married couple who died following a collision on the M56 in Cheshire have paid tribute to them.

Richard and Angela Wong, aged 62 and 56 respectively, died after their car was involved in a collision on the M56 on Thursday 19 September.

Their son and daughter said: “Angela and Richard were loving parents and grandparents, as well as a loving brother and sister.

“They were a devoted couple who had been married for 37 years and were well-loved by all those who were fortunate to have known them.

“They touched the hearts and enriched the lives of everyone who knew them.

“Our parents leave behind two children, two grandchildren and an extensive family and group of friends who are all devastated by their sudden loss.

“They will be truly missed by everyone who knew them.

“We are forever grateful to have had them as our wonderful parents. We love them very much and they will be forever in our hearts.

“The family at this time respectfully request to be left alone so that we can grieve and mourn their passing.”

Enquiries in relation to the collision are ongoing.

Anyone with any information about the incident is asked to call Cheshire Constabulary on 101, quoting IML 517424

Winners announced in Manchester PA of the Year Awards