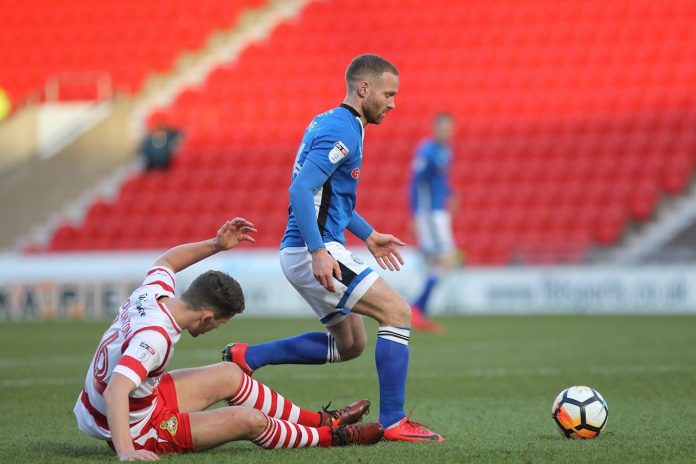 Rochdale Manager Keith Hill praised the fighting quality of his team as they progressed to the 4th Round of the FA Cup on Saturday after a win at Doncaster.

Calvin Andrew’s 18th minute goal proved to be the winner, when he rose highest to meet a Joe Bunney set-piece in from the right, but it was his all-round performance in both boxes that pleased Hill.

Speaking to the Rochdale website after the game he said

“It was a hard game, but there was a fighting quality, so I’m really pleased with the competitive energy, and obviously the intelligence. When you’re being competitive you’ve got to show intelligence, and I thought we did that today.

“We’ve been guilty of committing too many silly free-kicks rather than courageous free-kicks, but there was courage and intelligence to the way that we played today, rather than supporting the opponents’ tactics.

“We also did one thing that we haven’t done a regular basis, which is defend as a team when the opposition are strong. We stood strong when they were going direct, which they had to do because they were losing the game.”

Wigan will also be in tonight’s draw after a late Steve Cook goal at Bournemouth denied Paul Cook’s side a shock Premiership scalp.

Goals from Will Grigg and Nick Powell gave Latics the lead at the Vitality Stadium but Lys Mousset and Steve Cook levelled for Bournemouth in the second-half.

The post-match talk though surrounded a late penalty claim for Latics’ Ivan Toney, who felt he was felled in the area when set to score a winner.

Bolton fell at the first hurdle despite a spirited display against Huddersfield Town at Macron Stadium.

The Terriers had snatched a two-goal lead inside a matter of minutes at the start of the second half, and although Derik Osede halved the deficit with his second Bolton goal, the Yorkshire outfit held out to progress come the full time whistle.

To League action and Bury remain rooted to the foot of Division One after a 3-0 defeat at Plymouth while Oldham find themselves being dragged back in the relegation mix after Stephy Mavididi scored the only goal of the game at Charlton.

Speaking after the game, Manager Ritchie Wellens said: “I thought we applied ourselves really well and the side give everything. The goal in the first half is a poor one to give away.

“We tried and tried to get an equaliser and was camped in their half in the second half but when you haven’t got the quality in the final third then you aren’t going to score goals.