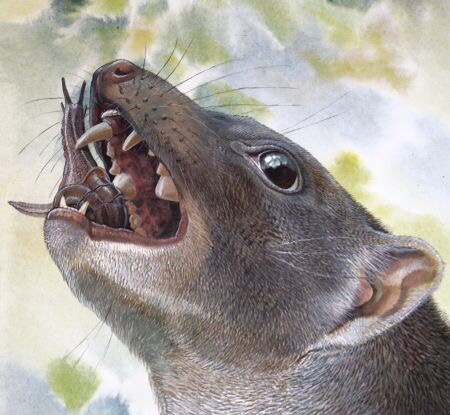 AN INTERNATIONAL team of palaeontologists which includes Dr Robin Beck of the University of Salford, have identified an entirely new family of extinct marsupial mammals from northern Australia.

The family has been named Malleodectidae, from the word for “hammer” in Latin and “biter”in Ancient Greek, referring to the presence of an enormous premolar that was clearly used for crushing hard food items.

No other mammal currently known has such an unusual crushing premolar, but similar teeth are seen in Australian lizards that feed on snails, suggesting that malleodectids may have had a similar diet. Malleodectids,which were about the size of ferret, are known only from 10-15 million year old fossils from the Riversleigh World Heritage Area in far northern Australia.

Malleodectids were probably related to living Australian carnivorous marsupials such as quolls, the Tasmanian Devil and the marsupial anteater or numbat, as well as the recently extinct thylacine or Tasmanian tiger. However, malleodectids represent a lineage of marsupials that has been distinct since at least 23million years ago.

Dr Beck, an expert in evolutionary biology at the University of Salford, who analysed the fossils, said: “Discovering an entirely new family of marsupials is really remarkable – the discovery of such a weird animal just goes to show that we have much, much more to find about the evolution of mammals.”

The new fossil is from a juvenile that was ‘teething’ and did not have a full set of adult teeth. The team used high resolution Computed Tomography scanning to ‘see inside’ the fossil and confirm the presence of the crushing premolar, which had not erupted yet.

Dr Beck added: “Without the CT data, it would have been very difficult to identify this specimen – new technology is really helping us to get the maximum amount of information out of fossil finds.”

The team,which is led by Mike Archer and Sue Hand at the University of New South Wales,will return to Riversleigh in July in the hope of finding more remains of malleodectids, as well as other fossil animals known from the site.

Manchester presents its finest for the Inaugural This is Manchester awards

Emergency budget looming for Manchester City Council as deficit due to Coronavirus is heading...