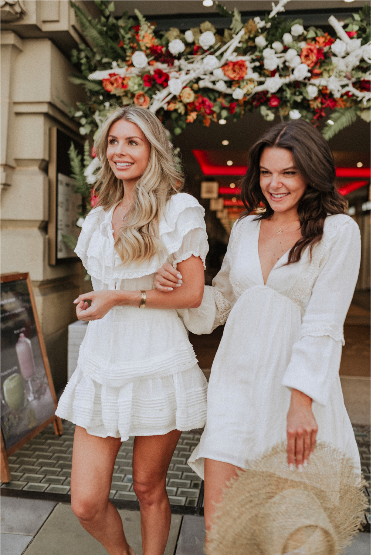 Manuka Jewellery, the Manchester-based jewellery brand, has officially re-launched following on from it’s successful pilot in December 2019, and this time it has former Coronation Street actress, Faye Brookes, on board with the campaign.

The Manuka necklaces, which feature a bee symbol in the shape of a heart, are available in a simple gold or silver design, and have a charitable cause too, with 10 per cent of profits going towards bee conservation charities.

The necklaces have already proven popular, with their pilot launch back in December selling out within 24 hours, and they’ve been spotted being worn by countless celebs, including Strictly star Catherine Tyldesley and Rebecca Walker.

Former Coronation Street actress, Faye Brookes, has become a brand ambassador for Manuka after she was blown away by the positivity of the mission, with Faye taking to Instagram to say, “So proud and humbled to be a part of the new launch of @manukamcr⁣⁣”.

The bee symbol became synonymous with the city of Manchester following on from the Manchester terror attacks in 2017, and Manuka further aims to raise awareness of the importance of bees for our eco-system, donating 10 per cent of their profits to bee charity “The Bumble Bee Conservation Trust”.

Kate Lock, owner of Manuka, said, “I’m so excited to be relaunching Manuka now, especially with Faye Brookes as our brand ambassador. People have had four months of lockdown, and as such have spent more time out in nature, enjoying walks and runs outdoors. The ‘bee’ is a tremendously important part of our eco-system, with bees pollinating around 30 per cent of food crops and 90 per cent of wild plants, and we really hope to raise awareness of how essential they are to our lives. We also couldn’t be a Manchester brand without a nod to the bee symbol!”

5 Fashion Accessories That Can Complete Any Outfit