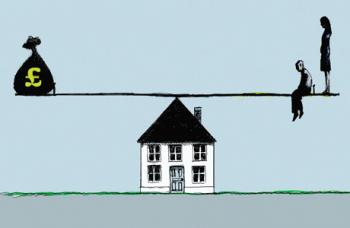 By 2016, that proportion had fallen substantially. Even with a 10% deposit, only around 60% of young adults would have been able to borrow enough to buy even one of the cheapest homes in their area.These are the headline findings of new research looking at young adults and the housing market in England, from researchers at the Institute for Fiscal Studies.

Among the findings of the report, researchers found that after adjusting for inflation, average house prices in England have risen by 173% since 1997, compared with increases in young adults’ real incomes of only 19%. Largely as a result, the share of 25- to 34-year-olds who own their own home fell from 55% to 35% between 1997 and 2017.

The really big increases in house prices happened before the financial crisis. It is only in London, the South East and East of England that average real house prices are above their pre-crisis level.

Rising property prices relative to incomes have made it increasingly hard for young adults to raise a deposit. In 2016, around half of young adults would have needed to save more than six months of their post-tax income to raise a 10% deposit on one of the cheapest properties in their area compared with just one-in-ten in 1996.

To buy an average-priced home in their area, more than three-quarters of young adults would need a deposit worth six months’ income or more (up from one-third in 1996).

Polly Simpson, a Research Economist at IFS and a co-author of the research, said,

“Big increases in house prices compared to incomes over the last two decades mean that it is increasingly difficult for young adults to get on the housing ladder, even if they do manage to save a 10% deposit. Many young adults cannot borrow enough to buy a cheap home in their area, let alone an average-priced one. These trends have increased inequality between older and younger generations, and within the younger generation too.”

Jonathan Cribb, a Senior Research Economist at IFS and co-author of the research, said,

“The most economically productive and wealthiest parts of England – London and the South East – are those with the most restrictive planning constraints. It is unsurprising that these areas have also experienced the biggest house price increases. Increasing the responsiveness of construction to house prices is a necessary part of the solution, particularly in these areas. Unlike other policy alternatives, this would both help reduce house prices, boost homeownership and reduce rents, benefiting renters, some of whom will never own.”