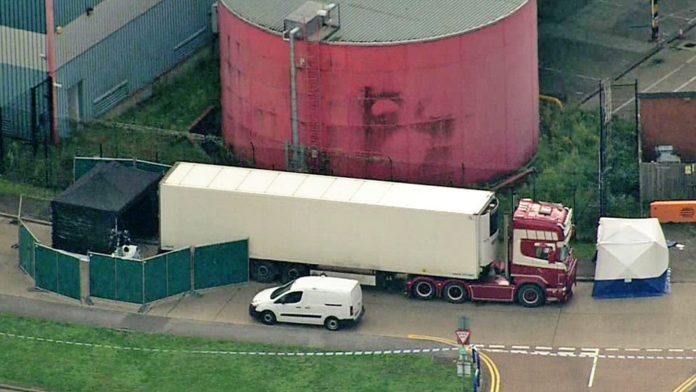 Essex Police have released further information this morning as they continue to investigate the deaths of 39 people who were found in a lorry in Grays yesterday morning.

38 are believed to be adults, and one is a young adult woman. It had previously been reported that she may have been a teenager.

It has since been confirmed that eight of the deceased are women and 31 are men and all are believed to be Chinese nationals.

The tractor unit of the lorry had entered the country via Holyhead on Sunday 20 October, having travelled over from Dublin.

The lorry then collected the trailer, which had travelled from Zeebrugge, at the port of Purfleet at around 12:30am on the 23 October. The cab and trailer left the port shortly after 1.05am.

Essex Police have made the following statement

“The lorry has since been removed from the industrial park to allow the next stage of our investigative process to be conducted in peace, and to give the utmost dignity to those within the trailer as we prepare for a coroner’s post-mortem examination.

Each of the 39 people must undergo a full coroner’s process to establish a cause of death, before we move on to attempting to identify each individual within the trailer. This will be a substantial operation and, at this stage, we cannot estimate how long these procedures will take.

Local residents and businesses have shown us the utmost kindness and respect as we deal with this difficult and sensitive investigation. Thank you for patience, your offers for cups of tea for our hardworking teams, for the flowers that have started to appear in Eastern Avenue, and the signatures we know will appear in the Book of Condolences at the Civic Centre.

We would also like to thank all of our local and national partners for their assistance and support, especially the Red Cross who gave our officers a quiet place to go when they needed a moment, and Thurrock Council who have continued to help us ensure that disruption to the local community is minimal.

We will continue to work with partners and other law enforcement agencies to establish exactly how these 39 people lost their lives in such an untimely way. This process will be complex and lengthy, as well as incredibly challenging for all those involved, but we will not stop until we get answers for the loved ones of those who have sadly died.

Three breast cancer survivors from Manchester get together to produce a cook book raising...