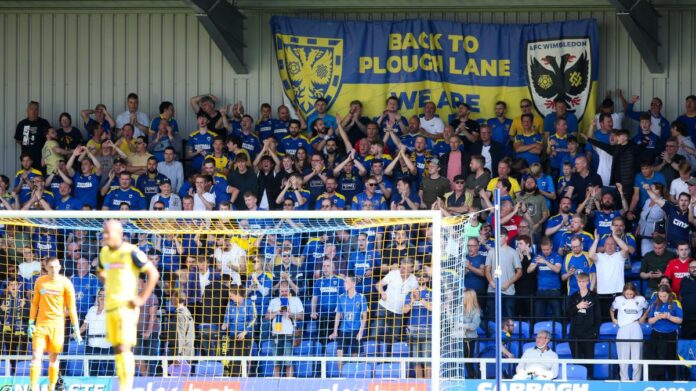 Wigan Athletic kicked off their 2021/22 Sky Bet League One home campaign with a last-gasp victory against Rotherham United on Saturday.

Will Keane headed home a dramatic late winner for Latics in stoppage time from Max Power’s excellent free-kick to help Latics earn all three points at the DW Stadium.

Bolton Wanderers were involved in a thriller in London as they shared the points in a 3-3 draw against AFC Wimbledon at Plough Lane.

Although the hosts took a lead through Will Nightingale, Wanderers got themselves in front shortly afterwards when Eoin Doyle converted from the spot before Josh Sheehan grabbed his second goal in successive league games.

And when Dapo Afolayan extended Wanderers’ lead shortly after half-time it appeared that the points were heading north.

But strikes from substitutes Aaron Pressley (penalty) and Dapo Mebude ensured the game ended all square.

In League Two, Rochdale claimed a point from their opening home game of the 2021/22 campaaign, following an goalless draw with Scunthorpe United at the Crown Oil Arena.

Manager Robbie Stockdale said that he was “disappointed to maybe not win it,”

It was also goaless at the Peninsualr stadium where Salford City were held to a draw in a goalless afternoon against newly-promoted Sutton United.

Neither side could break the deadlock in 90 minutes, in a game where chances were few and far between. The game’s golden chance fell to the visitors in the final minute of normal time when Sutton’s Richie Bennett found himself one on one with Tom King, but the ‘keeper saved heroically down to his right and secured both Salford’s point and a first clean sheet.

Oldham suffered heartbreak in the last minute of the match after they nearly secured a dramatic point in West Yorkshire against Bradford City.

Lee Angol gave the hosts the lead with a half-volley from outside the area during the first-half at the Utilita Energy Stadium. Dylan Bahamboula created insane limbs in the away end after the flamboyant attacker netted a well-deserved equaliser in added time.

However, the Bantams won a last minute penalty which Angol just about managed to slot past an injured Danny Rogers which secured their first win over Latics since August 2019.