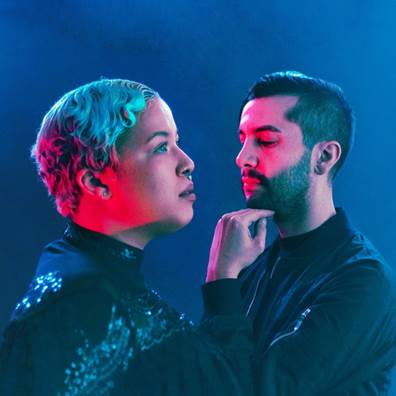 Chicago-based duo of Na’el Shehade and Via Rosa conjure up an alluring brew of R&B and dance music. See it live at Night & Day, Manchester on 29th January.

Both members carry considerable musical backgrounds individually. Born in Austin and eventually raised in California, Via’s parents were hippies that played in a reggae band. At 14 she began making music on her own.

She eventually moved to Chicago in 2010 and released her debut the DeathViaLove EP on Soundcloud in 2014. The Chicago-born Na’el came from an immigrant family. He started DJ’ing parties before he even reached his teenage years. He began making music at the age of 13 and started producing and engineering professionally in college. He went on to contribute to Chance the Rapper’s Acid Rap, along with engineering for Kanye West’s remix of Chief Keef’s colossal “Don’t Like.”

The duo head on tour next year, across the UK and Europe, including a stop at Manchester’s Night and Day Café on 29th January, with tickets available here