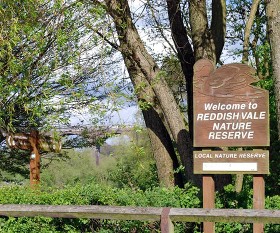 Greater Manchester Police are appealing for information after a dog walker was threatened and assaulted in Stockport in Reddish Vale Country Park yesterday afternoon.

The new dog walker had been approached by a man who picked up the victim’s dog by the neck and threatened to kill both the dog and owner. There was a short altercation which resulted in the victim sustaining facial injuries. He did not require hospital treatment.

The offender is described as being white, approximately 6ft tall and of a small build with short mousey-brown hair. At the time of the incident, he was wearing dark clothing. His appearance is described as unkempt.

DS Lee Attenborough, of GMP’s Stockport district, said: “This was an unprovoked attack which could have had serious consequences. Thankfully, the victim’s injuries were minor and the dog was unharmed.

“I understand that incidents of this nature are a cause for concern but I would like to use this opportunity to reassure members of the public that enquiries are ongoing and officers are carrying out extra patrols.

“We are aware that there were several members of the public in the area at the time who witnessed the incident and aftermath, I appeal to them or anyone else with information which may assist us to get in touch.”