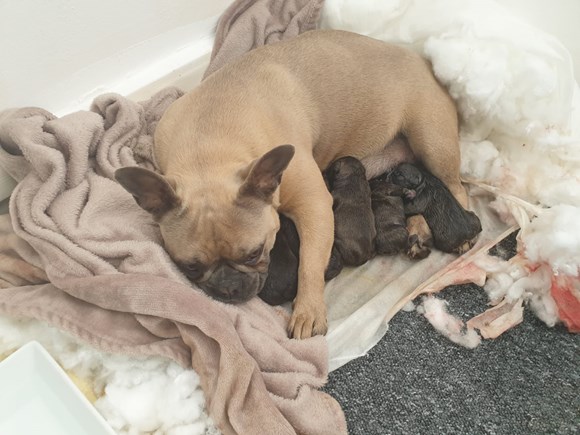 Maggie the French Bulldog was taken from an address in Devon back in May.

A dog stolen from Devon and her six puppies will be reunited with their owner, thanks to police officers in Partington.

Maggie the French Bulldog was taken from an address in Bradninch in Devon on Thursday 13 May while she was heavily pregnant.

Following information from the public, officers from the Trafford West Neighbourhood Team diligently gathered intelligence, which indicated the dog was being kept at an address on Moss Lane in Partington.

Following further inquiries, officers were let into the property yesterday and the dog was discovered as she was having her puppies. All of the dogs were recovered and taken into Veterinary care, and are doing well.

A 28 year old woman has been arrested on suspicion of handling stolen goods and released under investigation.

A 33 year old man has also been arrested on suspicion of theft, and released under investigation.

“Maggie and her pups will be reunited with their owner shortly, and I’d like to thank our partners at Devon and Cornwall police for their assistance, as well as the public for working with us to track them down.

“French Bulldogs are an extremely popular breed, and the price of buying a dog has increased. But dog theft isn’t about money for victims, they are losing a member of the family. Hopefully this will send a strong message that GMP will not tolerate this kind of criminality, and anyone who commits this kind of crime, will be brought to justice.

Mayfield hosts technicolour message of thanks to front line workers

Researchers say benefits sanctions should not be imposed on veterans