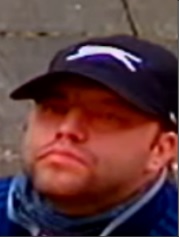 Police investigating a burglary in Rochdale have released footage and images of a man they want to speak to in connection with the incident.

Three men smashed the rear patio door window of an unoccupied property on Edenfield Road before stealing jewellery and cash around 2.30 on the afternoon of the 13th Feb.

Police have released footage of three men with their faces covered attempting to gain entry to the back of the property. An image of a man without his face covered has also been released.

Police Constable Phillip Jones of GMP’s Rochdale District said: “This was a brazen burglary that deprived a family of a number of possessions of sentimental value, as well as a quantity of cash.

“Footage from this burglary is very clear and although the men’s faces are covered, we’re confident that there will be people who recognise these men. Pay attention to how these men walk and the clothes they are wearing. Is it someone you know? We have also released an image of a man whose face isn’t covered. Again, this is a clear image and we would expect someone to recognise this individual. “If you do, or if you have any information that can assist our enquiries, then please get in touch as soon as possible.”