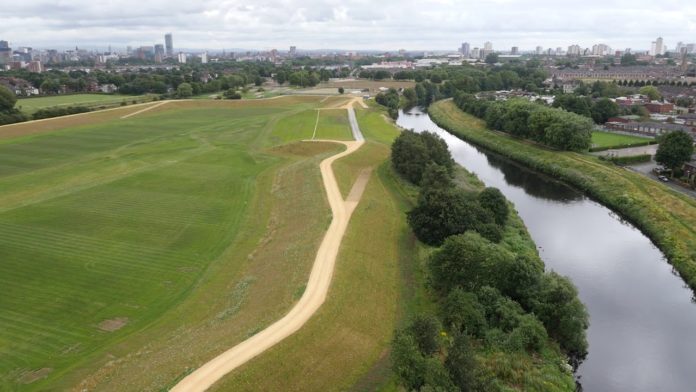 The five minute video, filmed on a drone, gives soaring views of some of the city’s 60 per cent green space.

These spaces have seen over £127million of investment in recent years

This includes the £10.2million flood protection scheme at the Wetlands in Kersal which provides more protection to 1,400 homes and 500 businesses. The basin is opened when river levels rise. It can capture up to 650 million litres of water and release it slowly when the river levels drop.

And also featured is Peel Park, one of the first public parks to be opened in the country in 1846. Peel Park was named in honour of our former Prime Minister and in 2013 the park was awarded £1.6 million from the Heritage Lottery Fund to restore the park to its former glory.

Salford has seven Green Flag Award winning parks and open spaces – a mark of excellence that recognises the best green spaces in the country. It also has local nature reserves which support a rich and vibrant variety of wildlife.

Salford City Mayor Paul Dennett said:  “We are very proud of our industrial past where we earned our nickname ‘dirty old town’ – but we also are proud of the investment in our precious greenspaces.

“The investment seen in our green spaces over the last 5-10 years is nothing short of a revolution in opening up new areas of nature and beauty to the public. As a city we are determined to focus on providing good quality public space as well as green solutions to issues like drainage and transport. It’s no surprise that Friends of the Earth has listed us as the greenest council in the North West!

“This aerial footage will surprise some people much green space we have in this city and hopefully encourage them to get out and explore them.

“We are doing all we can to move from the industrial past, transform the face of our city and bring green spaces to life.  It is an exciting time to be a Salford resident.”

The video finishes with footage from RHS Garden Bridgewater which will open in 2020.