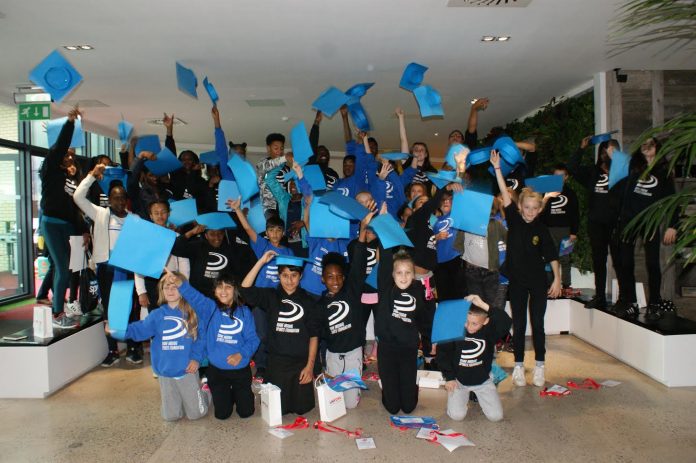 The third annual graduation for the Diane Modahl Sports Foundation (DMSF) youngsters was a resounding success and brought a smile to Manchester’s face – proving the City is continuing to strive for happier times.

Held at the headquarters of UK Fast in Manchester, the packed-out event was attended by almost 200 people, including 90 young people from schools across Greater Manchester, their families and peers – who all celebrated their focus, commitment, resilience and positivity – the ethos behind the DMSF.

Speaking at the event, Olympian Steve Parry said: “What an incredible organisation. I’m absolutely bowled over by the attitudes and achievements of the young people I met tonight; this charity resonates massively with me and I’m pleased to support it.”

DMSF strives to give young people a purpose, through and beyond sport, and currently works with 1180 young people in schools and community venues across Manchester.

Former Olympian, Commonwealth Games Gold Medallist, and Co-Founder of the DMSF, Diane Modahl, added: “Steve has faced magnificent highs and utter lows in both his professional and personal life – he encouraged us to believe in ourselves and to never give up – that’s what success and happiness is all about.”

Leading into the evening, the DMSF class of 2017 was celebrated further with a host of awards covering five areas; Sport, Business, Education and Leadership, Athlete of the Year and a commendation to the former Wright Robinson pupil Aimee Pratt. Aimee received the coveted Outstanding Achievement award having been discovered by the charity, and she continues to impress having qualified for both the World Junior Championships and the European Junior Championships consecutively for two athletic seasons, under the guidance of DMSF Head Coach Vicente Modahl.

Diane concluded: “This year’s graduation was again a brilliant collective team effort.  We are driven by our passion to make a meaningful difference within our community and to the lives of the young people who are seeking opportunities, often against very difficult financial, personal and emotional backdrops, that enables them to find a sense of purpose.

“Thank you to all our sponsors – without whom we wouldn’t exist, our parents, carers and of course every young person who has participated and continues to take part in our programmes across North, South and Central Manchester.

“Although we’re currently facing difficult times across our City – our aim at the graduation is to ensure that one question is at the forefront of our minds “Did you have fun today?”

40 year old women raped “near water” in the City Centre