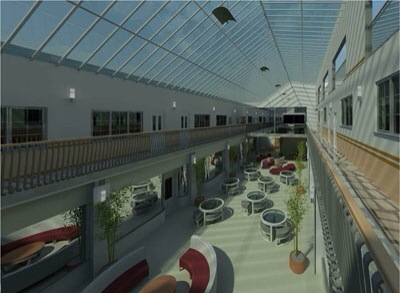 The Clarence Arcade in Stamford Street was built in 1894 and at the time was Tameside’s only covered Victorian shopping arcade.Once thriving, in its heyday it was considered to be one of the most prestigious shopping locations in Ashton as it ran parallel with Stamford Street, at that time the town’s main shopping street, but, as Stamford Street’s importance as a shopping venue waned, so did the fortunes of Clarence Arcade.

It was refurbished a few years ago with the former shop units converted to offices.

Now with £1m from the European Regional Development Fund, matched by developer Jersey Street Properties, work is due to begin in July 2015.

The plans include converting the 20,700 sq ft vacant retail arcade into offices with high speed broadband, meeting rooms and conference facilities. The scheme will also incorporate a glass atrium as a communal space for users.

The high quality business centre fits in perfectly with the wider plans, through Vision Tameside and the redevelopment of the market place, to transform Ashton Town Centre into a modern and vibrant place which will attract further investment, businesses and shoppers.”

Pink Martini at the Bridgewater Hall