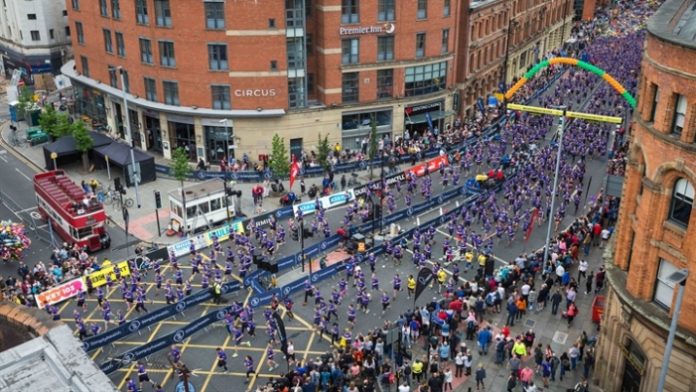 THE date for next year’s Great Manchester Run has been announced.

Europe’s biggest 10K, which was accompanied by a half marathon for the first time in May, returns to the city centre of Manchester on Sunday, 20 May, 2018, with entries for both distances opening on Tuesday, 4 July at noon.

In May, the people of Manchester united in a display of solidarity, determination and resolve as the Simplyhealth Great Manchester Run was staged just days after the terrorist attack on the city.

The staging of the event created news headlines around the world and an estimated £9 million was raised by participants for a host of charities.

Thousands of runners turned out for the 10k and half marathon event – many wearing yellow in support of the city’s official colours.

Back for 2018 will be the Simplyhealth Junior and Mini Great Manchester Run events, where youngsters aged between three and 14 participated in the city centre on the same day as the 10K and the half marathon.

The Simplyhealth Great Manchester Run was first staged as a legacy event following the Commonwealth Games, held in Manchester in 2002, and has grown to be the largest of its kind in Europe, with more than 300,000 finishers crossing the line in its 15-year history.

Attracting some of the world’s finest distance runners, Haile Gebrselassie, Tirunesh Dibaba, Kenenisa Bekele, Wilson Kipsang and Great Britain’s Jo Pavey have all graced the streets of Manchester, while hundreds of celebrities have also taken on the event, raising money for charities and other good causes.

The 10K and half marathon both start on Portland Street, the half marathon plots a course to Manchester City’s Etihad Stadium, before heading west to Manchester United’s Old Trafford, where it picks up the 10K route back into the city centre, finishing on Deansgate alongside the iconic Beetham Tower.

Brendan Foster, chairman of event organisers The Great Run Company, said: “This year’s Simplyhealth Great Manchester Run was an emotional and poignant event for all involved. It showed the resolve and solidarity of this magnificent city.

Manchester City Council’s Executive Member for Culture and Leisure, Councillor Luthfur Rahman, said: “The Great Manchester Run was a great force for good in 2017, helping the city to demonstrate its incredible spirit of solidarity and togetherness, while raising millions of pounds for charities, including the We Love Manchester Emergency Fund.

“The event’s enduring popularity means that we’re already excited about next year’s run.  So I encourage all Mancunians, from seasoned runners to those who are thinking about getting started, to take part in this fantastic occasion.”