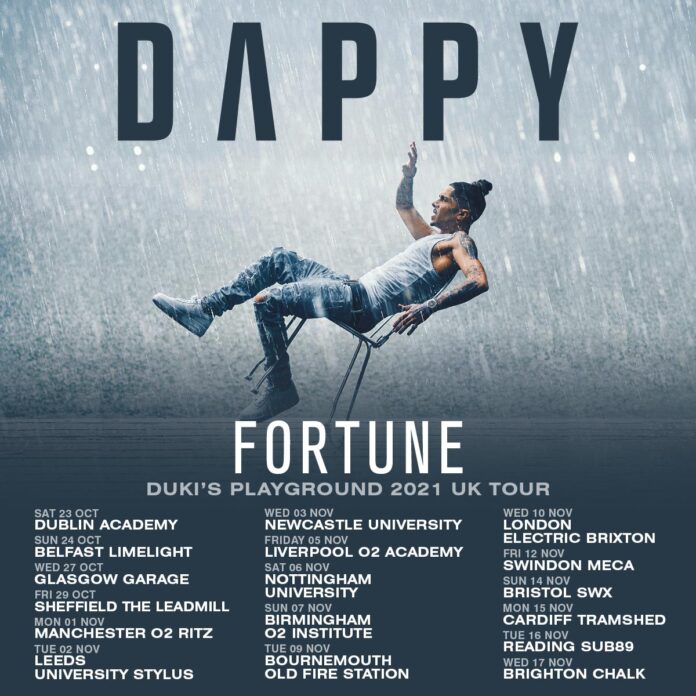 Dappy has announced a huge UK tour for October and November 2021 which includes a show at Manchester O2 Ritz on 1st November.

‘Wounds’ is the first track to be taken from Dappy’s long awaited new project ‘Fortune’ which drops on June 25th.

Dappy is a four times platinum selling, chart topping British rapper, singer, songwriter and producer.He has had 170million views on YouTube of his solo music and has over 1.2 million Spotify monthly listeners.

He is best known for being a member of Camden based super group N-Dubz, with his cousin Tulisa and producer Fazer. N-Dubz had 8 Top 40 hits on the UK charts, two platinum selling albums and a sold out Arena tour of the UK.

Dappy’s solo debut ‘No Regrets’ hit No.1 on the Official Charts. This was followed by another Top 10 hit ‘Rockstar’ featuring the legendary Brian May, and his debut solo Top 10 album ‘Bad Intentions’. Another single ‘Beautiful Me’ hit the Top 20, and his 2018 single ‘Oh My’ has had over 54 million streams on Spotify.

Tickets are on sale now and available from gigst.rs/dappy

Cabbage have announced the details of their brand new single ‘Torture’ and an 11...