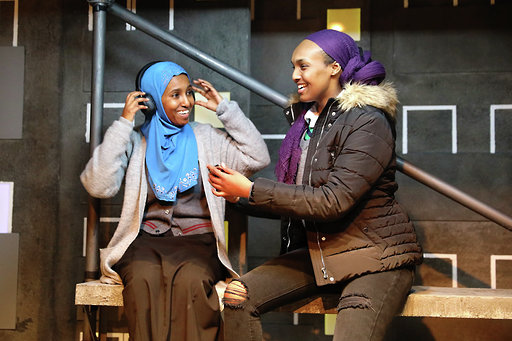 Well, after leaving The Studio at the Royal Exchange, I’m not sure how to feel. I think I’m a bit shell shocked.

I spent half the performance laughing and trying to keep up with the fast paced hilarious brilliantly well observed dialogue of streetwise Muna but half feeing horrified that FGM goes on and that it goes on right under our noses in the UK.

This is a tale of two girls, Muna and Iqra, coming from the same start in life and who appear to be living very different lives now. But both are hiding a secret that they feel they cannot share with their school friends.
Westernised and sassy Muna, played brilliantly by Asha Hassan, outwardly appears not to have a care in the world – apart possibly from having to meet with the school counsellor on occasion and the driver not letting her on the bus after she’d run for it…. lucky for him he ain’t the driver on the bus home!
But inside she is living in dread at the thought that her little sister’s birthday is coming up and she will be 7 years old… the age when she might have to go through the same horrors Muna had endured 8 years earlier when at 7 she ‘became a woman’, a ‘good clean woman’.
The palpable relief when Muna believes her Mum is not taking her sister to Somalia for the ‘operation’ is turned about face by the shock and the gut wrenching realisation this type of ‘procedure’ could be done in the local tower block with the help of someone she knows.
Hermon Berhane brings a softness to the role of Iqra and her account of her own experience was so raw that you could touch it, which makes it all the harder to understand why she then accepts that FGM has to happen, with her rationale being that this is just the way it is. It’s what’s expected after all?
Is this really done for religious reasons, is it just for money, or an abuse of power over women?  The fact FGM is done at the hands of other women in the way an abused person can go on to abuse is very hard to accept, but this will continue unless, as Muna points out, someone breaks the cycle.

I really don’t know enough about FGM but watching this ‘little’ play makes me want to find out more about this huge issue that, in the main, is not discussed. I feel ashamed how much the repulsiveness of FGM makes me not want to think further about it but every one of us needs to see how we can help in this underground battle.

Superb thought provoking play, beautifully acted with a creatively designed but bleak set which is amplified by the simplicity of The Studio setting.