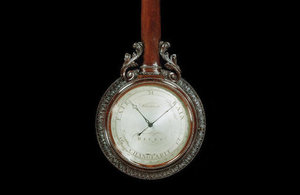 A rare Georgian barometer is at risk of being exported from the UK unless a buyer can be found to match the asking price of £160,000.
Culture Minister Matt Hancock has placed a temporary export bar on the George III mahogany wheel barometer to provide an opportunity to keep it in the country.
The piece is one of a small number of its design known to have been made by the renowned Whitehurst family of clockmakers, from Derby. It is one of only nine of this type known to exist, none of which are known to be in a UK public collection.
During the reign of King George III natural philosophy had become increasingly popular, with scientific instruments finding their way into the homes of the elite classes. The ornate decoration of this instrument indicates that it was intended for this purpose.
The possible association of the barometer with John Whitehurst makes this item of particular interest.

As a clockmaker, instrument maker and natural philosopher he was a member of the Lunar Society, became Stamper of Money Weights at the Mint, was painted by Joseph Wright and was elected a Fellow of the Royal Society.

Unique mapping project to capture the sounds of our shores

Channel 4 to recreate legendary Mutiny of the Bounty voyage

Can you help Tate Archive identify these John Piper photographs?