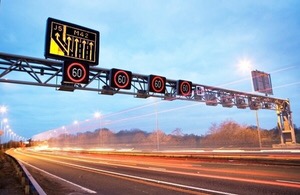 A unique crime-fighting liquid is being used to deter metal thieves on the M60 and M62 in Greater Manchester.
Highways England is using 140 litres of a ‘SmartWater’ solution on cables being laid along a 17-mile stretch of motorway between junction 8 of the M60 near Sale and junction 20 of the M62 near Rochdale as part of the smart motorway scheme.

Nearly 50 miles of cables will run through underground pipes along the route, which will be used to power hi-tech equipment designed to cut congestion and improve journey times by using variable speed limits on overhead message signs.

The new equipment, which also includes around 1,000 lighting columns and full CCTV coverage, will be mainly powered using fibre-optic cables, which have no scrap value, but some metal cables are also being used.

SmartWater was created in 1993 by a former police officer and his brother, a chemist, and is now widely used by major utilities and infrastructure companies to protect metal and deter thieves.

The invisible liquid can only be seen under ultra-violet light and contains a unique forensic code which can be used to irrefutably prove ownership and link criminals to a crime scene. It is being painted on cables, equipment and machinery being used for the smart motorway project.

We’re investing millions of pounds of taxpayers’ money on the smart motorway scheme in Greater Manchester so it makes sense for us to do all we can to protect that investment.

The technology we’re installing will help bring an end to the stop/start conditions many of us have experienced in rush hour traffic by using variable speed limits to stop people slamming on their brakes when they reach queueing traffic, causing tailbacks behind them.
We’re covering the cables and equipment being installed as part of the project with SmartWater and warning thieves to stay away from the motorway as the police will be able to prove exactly where the metal came from if anyone’s caught trying to sell it on.
Highways England, Greater Manchester Police and SmartWater investigators are working in partnership to raise awareness of the project and help scrap dealers avoid buying stolen goods.
Many dealers now specifically check for SmartWater and refuse to handle any metals marked with the liquid. This makes it more difficult for thieves to sell on stolen goods and increases their chances of arrest and prosecution.
When the smart motorway scheme is completed in autumn 2017, around 200 new electronic message signs on overhead gantries will warn drivers of changes in the mandatory speed limit, lane closures and incidents ahead.

The hard shoulder will also be permanently converted into an extra lane between junctions 18 and 20 of the M62, increasing capacity on the stretch of motorway linking the North West to Yorkshire.

£33 million-That’s the annual value of Greater Manchester’s trees to the economy and 1...